The Swiss team will take the start on Sunday of the nippon race for the second time in a row.

REBELLION Racing will race next week-end at the Fuji Speedway in Japan for the 6 Hours of Fuji. Last year, Rebellion Racing secured the win in the FIA Endurance Trophy for LMP1 Teams after the japanese enduro. As the single LMP1 privateer team entry for the race, Rebellion Racing aims to secure a podium finish in front of the strong competition of four factory cars. Andrea Belicchi and Mathias Beche will constitute the line-up of the Lola-Rebellion #12. 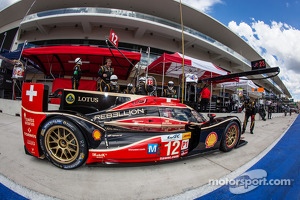 Because of the clash between FIA WEC and ALMS calendars, the crew of the team had to split, the other half of them flying to America to race for a back to back victory at the 16th edition of Petit Le Mans at Road Atlanta. The week-end to come will be a very challenging time for Rebellion Racing as two cars will be competing in two different tracks in the world, nearly in the same time . The start of the 6 Hours of Fuji being only half an hour after the end of the race at Petit Le Mans. The two separate crew of the team are now looking forward to do their best to deliver two strong results at the end of the weekend.

The start of the race will be given at 11h00 local time on Sunday, October 20th.


Andrea Belicchi : « I'm happy to be back after my crash at Le Mans. It has been a long time waiting until that moment. Fuji Speedway is quite a nice track so it's a good place to race again. It should be challenging for me after such a long time out of the car because we will only be two drivers to drive the car during the race but I feel ready. After Le Mans race, the team improved the car. So, I'm looking forward to feel the improvements. We have the package to secure a good race. I'm confident for the race. »

Mathias Beche : « It's the first time I race at Fuji. I look forward to discovering this new track. I'm happy to be again with the team and my teammate Andrea. Our aim for this weekend will be to continue to test and improve the car. Racing with only two drivers can be an advantage for me because I'll have more time to spend in the car. It will be good to learn the track, improve my driving and to find a good setup on this specific track. Once again, traffic will be the key, especially in slow sections were there is not a lot of visibility to overtake GT cars. I'm really happy to come and race here in Japan. Japanese people are welcoming and love motorsport. So it's nice to race in this atmosphere ! »

Ian Smith, Team Manager : « This is a challenging race weekend for us. The team and spare parts are split to race both at Fuji and Road Atlanta, so we can't afford any mistakes. With only two drivers, the race will be demanding for all of us. Anyway, the crew is well trained, motivated and know what they have to do. Everyone in the team is looking forward to give his best to secure a strong result here in Japan ! »