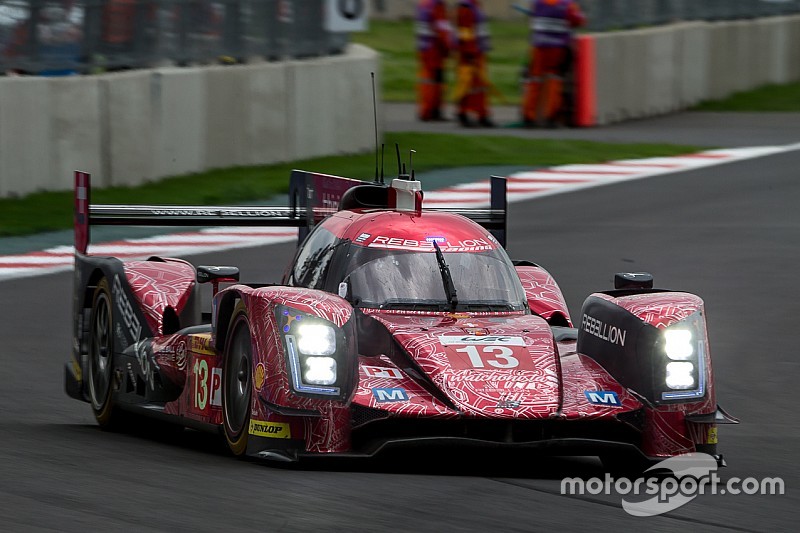 1st LMP1 Privateer winners of the 6 Hours of Mexico

For the first ever 6 Hours of Mexico, the fifth round the 2016 FIA World Endurance Championship, Alexandre Imperatori , Mathéo Tuscher and Dominik Kraihamer with the #13 Rebelion R-One AER secured fifth place overall and the win in the LMP1 Privateers.

Starting from seventh position on the grid, Alex Imperatori had to fight for a few laps to regain his grid starting position as the #4 ByKolles car passed him at the first corner. From that point onwards, Alex extended his lead and when the #4 car faced mechanical issues the way towards the LMP1 Privateer win was cleared for the #13 Rebelion R-One crew.

The Swiss team opted for a safe strategy and it was a smart choice. The race was highlighted by many collisions and several cars had brake issues. Some of the Factory LMP1 cars faced problems, the #5 Toyota was forced to retire and the #8 Audi took the chequered flag well down in the classification.

After Alex Imperatori, Mathéo Tuscher and Dominik Kraihamer took turns behind the wheel of the car and they had trouble free stints to bring the #13 Rebelion R-One to the end of the race in fifth place overall. The #4 ByKolles car finished second of the privateers, 19 laps down on car #13.

Rebelion Racing strengthened their position in the championship with four races to go. Alex Imperatori, Dominik Kraihamer and Mathéo Tuscher are sixth in the FIA WEC Drivers World Championship after the 6 Hours of Mexico.

The next race will be the 6 Hours of the Circuit of the Americas in Austin, Texas, sixth round of the 2016 FIA World Endurance championship.

Alex Imperatori – #13 Rebelion R-One: "I am pleased with the result. We knew that at some point we would have to nurse the car a little because of the high altitude and thin air at this track. We would have wanted the competition to last longer, but the way the race went after the ByKolles car had problems meant just bringing our car home safely. My two team mates did a great job and it’s a great reward for the team."

Dominik Kraihamer – #13 Rebelion R-One: "When I took the wheel it was challenging as it was raining and we had to swap several time from slicks to inter tyres. It’s not the most exciting race we’ve ever had, but in the end we have a Top 5 and the win in our category. Everything worked well for us during the race and I hope that it will continue like this !"

Mathéo Tuscher – #13 Rebelion R-One: " I think we did a great job today, fifth is a great result, I am super happy. We managed the strategy and track conditions well. My team mates did a great job. I can’t wait to race at Austin, I hope that we will be able to repeat today’s result or even a better one !.

Bart Hayden - Team Manager Rebelion Racing: " We're obviously delighted that car #13 secured its fourth win in LMP1 Privateer this season, and at the same time it’s our third top 5 amongst the Factory LMP1 cars. We couldn’t have achieved a better result today. It’s a great reward for the team and it shows again that when the Factory LMP1 cars hit trouble, an LMP1 Privateer entry can finish high in the classification, or on the podium like we did in Silverstone and Spa. We would like to have more competitors in the category, so we hope that other teams will join the championship. We are already looking forward to Austin where we will be looking for another strong result."