Toyota: Rebellion has pace to win at Silverstone 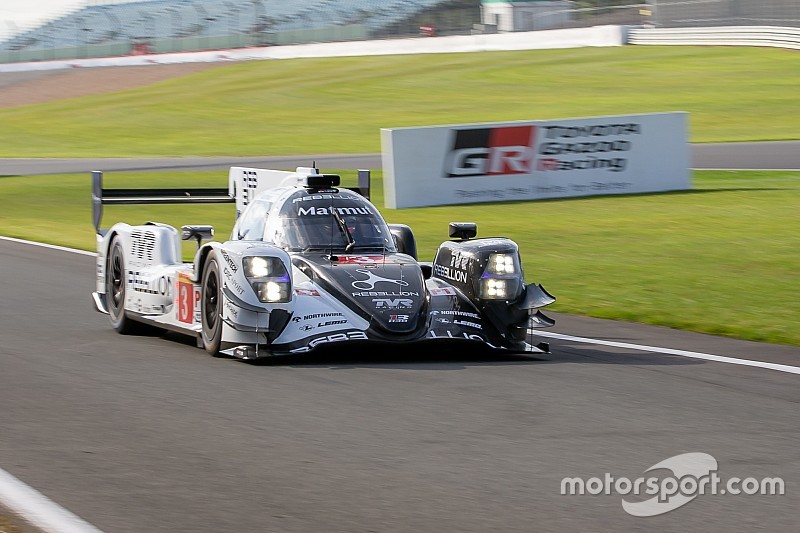 Rebellion Racing has already shown race-winning pace at Silverstone ahead of Sunday's opening round of the 2019/20 FIA World Endurance Championship season, according to Toyota.

Toyota Motorsport GmbH technical director Pascal Vasselon pointed to the speed of the #1 Rebellion-Gibson R-13 in qualifying on Saturday and in free practice on Friday as evidence that it will challenge his TS050 Hybrids in the Silverstone 4 Hours.

"If you look at the ideal times, putting all three sectors together, the top three cars are within one tenth in qualifying," he said. "If you look at Free Practice 2, the Rebellion is actually faster than us on traffic-free laps, consistently faster."

The #1 Rebellion qualified by Bruno Senna and Gustavo Menezes ended up half a second behind pole winners Mike Conway and Kamui Kobayashi, but Vasselon revealed that the best hypothetical lap for the fastest of the R-13s was only 0.092s behind.

"We managed to be one-two on the grid because our drivers combined their best sectors and because the two drivers were very those together. This is good news for the Equivalence of Technology."

Vasselon suggested that the Rebellion could potentially win today's race, but said it was more likely at round two at Fuji when the new system of success handicaps introduced in LMP1 in the WEC kicks in.

"A privateer could win here at Silverstone, but at Fuji they should be strong for sure," he said.

Vasselon conceded that Toyota's hybrid system should give the Japanese cars an advantage in traffic in the race.

"We have a bit more flexibility on traffic which compensates for the fact that we have slightly less pace in free air, but on the other hand they have higher top speed — they can pass in places we cannot," he said.

Menezes, who shares the #1 Rebellion together with Senna and Norman Nato, said that the WEC "had done a good job of closing the gap" between the factory Toyotas and the privateers.

Asked by Motorsport.com if Rebellion could finish better than third, he said: "We're still hoping for more; right now it is uncertain.

"I think we’ve a little bit of work to do, there was a little bit more in there but not much. Now it’s the curiosity of race pace. We know Toyota has the boost optimisation for quali, and I think Silverstone is a big learning race for the EoT.

"[Toyota] are always going to have a better situation in traffic with the boost, but we definitely see WEC did a good job of closing the gap. We don’t know how much by, we’ll find out over four hours today."

Jose Maria Lopez, who shares the #7 Toyota with Kamui Kobayashi and Mike Conway, said the Rebellion can "definitely" challenge for victory tomorrow, admitting the two R13s will be "difficult" to manage on a clean track.

"Honestly, we’ve had a few races where we arrive expected to be beaten by the privateers, and somehow we pull out a good performance," Lopez told Motorsport.com.

"We know especially in race trim they are very competitive, they have been faster in some sessions, so we expect them to be competitive tomorrow.

"In qualifying we can trim the boost in order to get an extra benefit, but I think we are starting a year that is gonna be different in many aspects. We won’t be at the front all the time, that’s for sure.

"They have a lot of downforce, they are much lighter, they have more power. For sure we can manage, but at one point in a clean track it’s gonna be difficult. I think it will be an interesting race. I think they can challenge tomorrow, definitely."

Changes to the EoT, the means by which the rule makers are trying to equate hybrid and non-hybrid cars, have resulted in the minimum weight of the Toyotas increasing by 28kg over the off season.

The Silverstone 4 Hours WEC round starts at 12pm today.