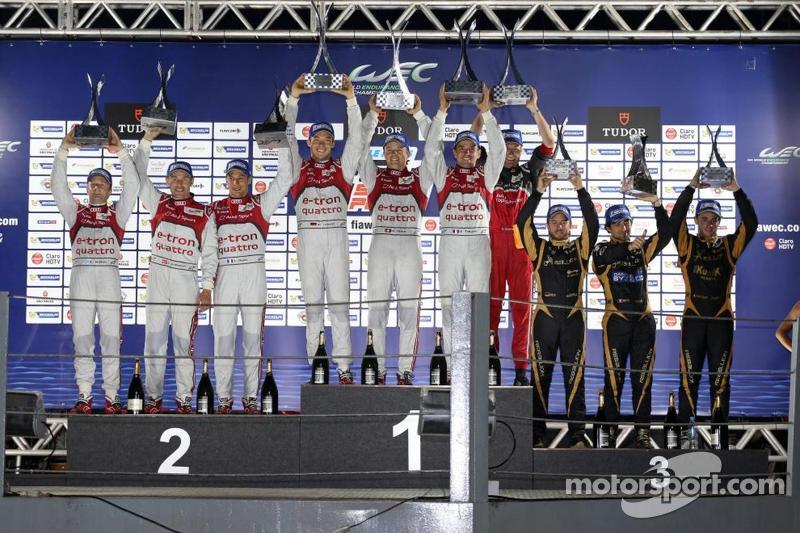 Audi, Rebellion and G-Drive Racing ORECA triumph in LMP. Victory in Brazil for Ferrari and Aston Martin in LMGTE.

Marcel Fässler, André Lotterer and Benoît Tréluyer today strengthened their challenge for the lead of the World Endurance Drivers Championship by taking the No.1 Audi R18 e-tron quattro to victory in the 6 Hours of Sao Pãulo, the fourth round of 2013 FIA World Endurance Championship. The 38,000 Brazilian fans who have visited a gloriously warm and sunny Interlagos track over the past three days have been treated to a feast of thrills and excitement on and off track at all times.

The reigning World Champions started from pole position but were passed at the start by a hard-charging Allan McNish in the No.2 Audi Sport Team Joest entry. The change to the overall lead came when Tom Kristensen was delayed leaving the pits by a slow-moving LMGTE Am car, demoting the 2013 24 Hours of Le Mans winners to second place.

Despite unexpectedly losing a wheel in the fourth hour and suffering further delays, the No.2 maintained second place overall and finished one lap ahead of the only other LMP1 finisher, the Privateer entry of Rebellion Racing. The No.12 Lola Toyota of Nick Heidfeld, Nicolas Prost and Mathias Beche finished two laps behind the Audi 1-2 after having a trouble-free and unchallenged run from start to finish.

Toyota Racing’s challenge for the LMP Manufacturers World Championship received an early blow when the No.8 Toyota TS030 of Stéphane Sarrazin was an innocent victim in a collision with the No.32 Lotus. The car was heavily damaged after crashing into the barriers and, despite his best efforts, the Frenchman was unable to rejoin and the car was forced to retire after just 35 minutes of the 6-hour race.

In LMP2 the No.26 G-Drive Racing ORECA 03 Nissan of Roman Rusinov, Mike Conway and John Martin had a faultless race from flag to flag, and crossed the finish line a lap ahead of their nearest class rivals, the No. 35 OAK Racing Morgan Nissan of Bertrand Baguette, Ricardo Gonzalez and Martin Plowman. British driver Conway set the trio on the path to victory with a solid triple stint in the first three hours, and the drivers felt that the ability to double-stint their Dunlop tyres was an undoubted advantage. The ORECA 03 Nissan of Pecom Racing’s Luis Perez Companc, Nicolas Minassian and Pierre Kaffer held second in class for much of the race but safety cars and pit stops saw several cars lose positions, and the Argentinian entry eventually finished third in class.

The result means that OAK Racing’s 24 Hours of Le Mans LMP2 winners, Baguette-Gonzalez-Plowman (subject to the appeal lodged by G-Drive Racing against their exclusion which is due to be heard on 10 September), now hold a 14 point lead in the FIA Endurance Trophy for LMP2 drivers (95 points).

Victory in Brazil for Ferrari and Aston Martin

While the LMP classes were pretty set throughout the race the LMGTE categories had the large and enthusiastic Brazilian crowd, together with the many fans watching worldwide through the live streaming on the FIA WEC website, on the edge of their seats from start to finish. There was extremely close racing, heartache, fires and accidents for many within the field and, at the chequered flag, it was the 2012 LMGTE champions AF Corse Ferrari who took their second victory of the season in the factory-led class.

The basic facts only tell part of the story, however, as the No.51 458 Italia of Gianmaria Bruni and Giancarlo Fisichella was involved in a nose-to-tail battle for the 6 Hours of São Paulo with the No.97 Aston Martin Vantage of Darren Turner and Stefan Mücke. Just 1.4 seconds separated the two cars at the end of 6 hours of hard racing and the result for both partly compensated for the misfortune of their different Pro team mates. The No.71 AF Corse Ferrari was involved in a spectacular conflagration which destroyed the rear end of the 458 Italia – driver Toni Vilander was lucky to escape unharmed in any way – and the No.99 of local hero Bruno Senna and Rob Bell was caught up in another car’s spin across the track which subsequently damaged its rear suspension beyond repair.

Third in class was the No.91 Porsche AG Team Manthey 911 RSR of Patrick Pilet and Jorg Bergmeister who had a less eventful race than their No.92 team mates, Marc Lieb and Richard Lietz, who lost a rear wheel after only ten minutes. Their fourth place finish, however, means that they are now in second place in the World Endurance Cup for GT drivers with 84 points, just two points behind new leaders Darren Turner and Stefan Mücke. Fisichella and Bruni’s victory means they are just one point further back in third place.

In LMGTE Am, Aston Martin Racing was able to claim a much deserved class victory, the No.96 Vantage V8 of Jamie Campbell-Walter and Stuart Hall crossing the finish line one lap ahead of the No.81 8Star Motorsport Ferrari 458 Italia of Enzo Potolicchio, Rui Aguas and Davide Rigon, the young Italian making an assured debut in the FIA World Endurance Championship. Porsche was the third manufacturer to mount the podium in the category, the No.88 Proton Competition Porsche 911 GT3 RSR of Christian Ried, Gianluca Roda and Paulo Ruberti taking third place.

There was heartache for the No.95 Danish-entered Aston Martin Vantage V8 of Nicki Thiim, Kristian Poulsen and Christoffer Nygaard who led the class right up until fifth hour before losing a wheel and being stranded out on track.

The LMGTE Am results mean that in the battle for the FIA Endurance Trophy for LMGTE Am teams, IMSA Performance Matmut, who finished fourth in class today, have had their lead reduced. They now have 76 points with both 8Star Motorsport and Aston Martin Racing on 74 points.

Toyota, Lotus crash out early and Vilander's Ferrari goes up in flames