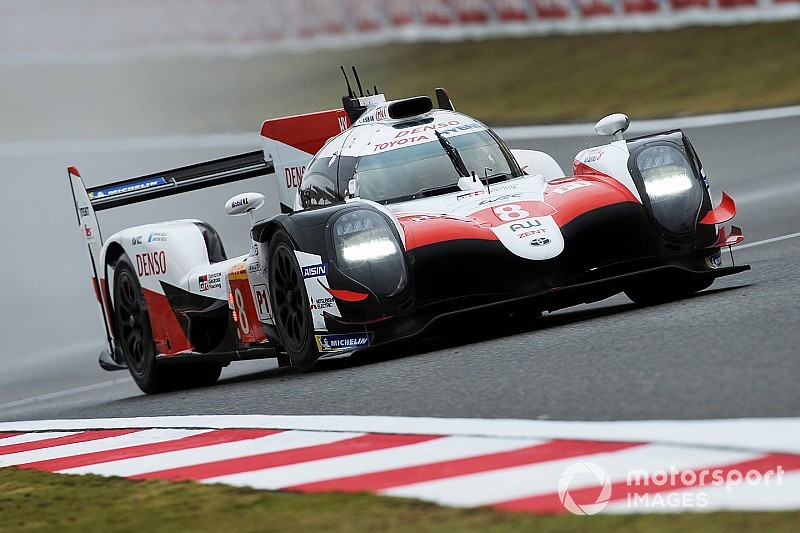 Toyota locked out the top two spots in a rain-affected opening practice session for this weekend's Shanghai FIA World Endurance Championship round.

SMP Racing's Jenson Button, fresh from winning the Super GT title last weekend in Motegi, led the majority of the session after setting a time of 2m00.369s in the #11 BR Engineering BR1-AER around 25 minutes into the session.

That stood as the benchmark until the two Toyota TS050 Hybrids equipped intermediate tyres with a little over 10 minutes to go as the track dried, the start of a late frenzy of improvements.

Sebastien Buemi in the #8 Toyota demolished Button's benchmark with a 1m57.987s, and subsequently dropped into the 1m56s before finally ending the session with a best time of 1m54.768s.

That was enough to beat Jose Maria Lopez in the sister #7 car by 1.586s, with the best of the privateers ending up a full 4s down.

Tom Dillmann briefly put the #4 ByKolles ENSO CLM P1/01-Nissan third-fastest as the track improved but in the end it was the #17 SMP Racing BR1 piloted by Egor Orudzhev that ended up best of the rest.

Rebellion's top entry was the #3 Gibson-powered R-13, fifth-fastest in the hands of Thomas Laurent, ahead of the #1 Rebellion of Bruno Senna and Vitaly Petrov in the #11 SMP BR1.

The #10 DragonSpeed BR1 did not profit from the drying track and slipped not only to last in the LMP1 field, 12s off the pace, but also behind the entire LMP2 contingent.

A late reshuffle in LMP2 resulted in Jackie Chan DC Racing topping its class, thanks to a late 2m02.923s lap from Jazeman Jaafar in the Fuji race-winning #37 Oreca 07.

Duval was forced to skip the Fuji round due to a clash with the Hockenheim DTM finale.

Only a handful of cars in GTE Pro improved late on, with the #81 BMW M8 GTE of Martin Tomczyk ending up top.

The former DTM champion's best time was 2m09.830s, putting him a massive three seconds clear of the next quickest car in the class, the #91 Porsche 911 RSR of Richard Lietz.

Corvette Racing's lone C7.R was seventh-fastest in the hands of Oliver Gavin, 3.4s down on Tomczyk's benchmark.

The TF Sport Aston Martin squad leapt to the top of the times in GTE Am at the end of the session, Charlie Eastwood's best effort of 2m11.764s putting the #90 Vantage second overall among the GTE cars.