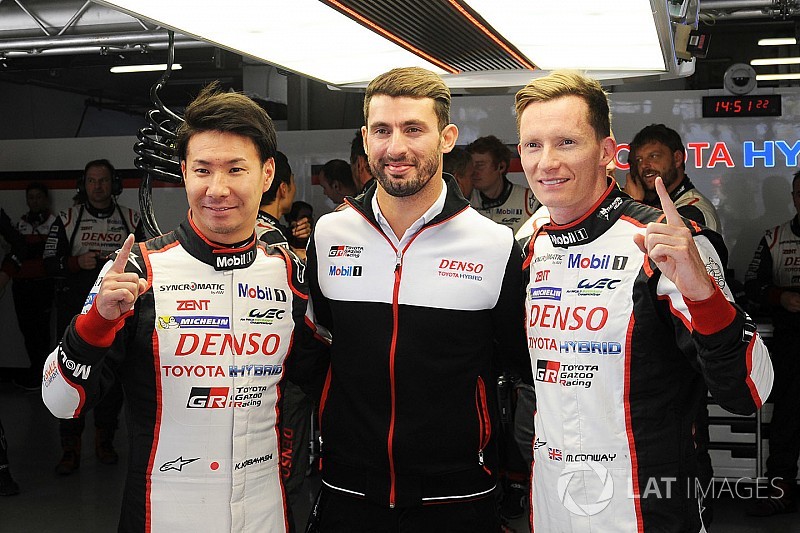 Toyota claimed its first FIA World Endurance Championship pole position in four races ahead of this weekend's penultimate round in Shanghai.

The #7 Toyota TS050 Hybrid came from behind the two Porsches courtesy of the fastest lap of the session from Kamui Kobayashi during the second runs.

Teammate Mike Conway had trailed Nick Tandy and Brendon Hartley in the two 919 Hybrids after the first runs.

But Kobayashi's 1m42.526s, which eclipsed Tandy's best from the first runs by fourth tenths, leapfrogged the Toyota ahead of the two German cars to give Toyota its first WEC pole since the Nurburgring round in July.

Kobayashi said: "The lap was not perfect, actually. I never had new tyres up to qualifying and it was quite difficult to adjust."

Conway added: "We've topped every session so far, so we rolled out with a good car. I felt I left a couple of tenths on the table, so I was expecting Kamui to go out and go quicker."

Sebastien Buemi and Anthony Davidson took third spot in the #8 Toyota on 1m43.445s.

Brendon Hartley and Earl Bamber ended up fourth just four hundredths behind in the second Porsche after the latter spun to the detriment of his tyres on his warm-up lap.

LMP2 pole went to Bruno Senna and Julien Canal in the best of the Rebellion Oreca 07s.

That put them just over two seconds up on the G-Drive Oreca qualified by P2 debutant Nico Muller and Leo Roussel.

The second Rebellion car was third in the hands of Nelson Piquet Jr and David Heinemeier Hansson, while the championship-leading Jackie Chan DC Racing Oreca ended up fourth in the hands of Oliver Jarvis and Thomas Laurent.

Sorensen had trailed Michael Christensen in the best of the factory Porsche 911 RSRs after the first runs, but Thiim went seven tenths faster than Kevin Estre to overhaul the German car.

James Calado and Alessandro Pier Guidi were three tenths behind on aggregate in their AF Corse Ferrari 488 GTE.

The two Ganassi Ford GTs ended up in fourth and fifth positions.

Harry Tincknell stayed out for a second lap in the #67 car he shared with Andy Priaulx to move ahead of the sister Ford of Olivier Pla and Stefan Mucke.

Pedro Lamy and Paul Dalla Lana took a sixth GTE Am pole of the year aboard their Aston Martin.

The one point on offer moved them and teammate Mathias Lauda into the joint points lead with the Dempsey-Proton Porsche trio Matteo Cairoli, Marvin Dienst and Christian Ried.