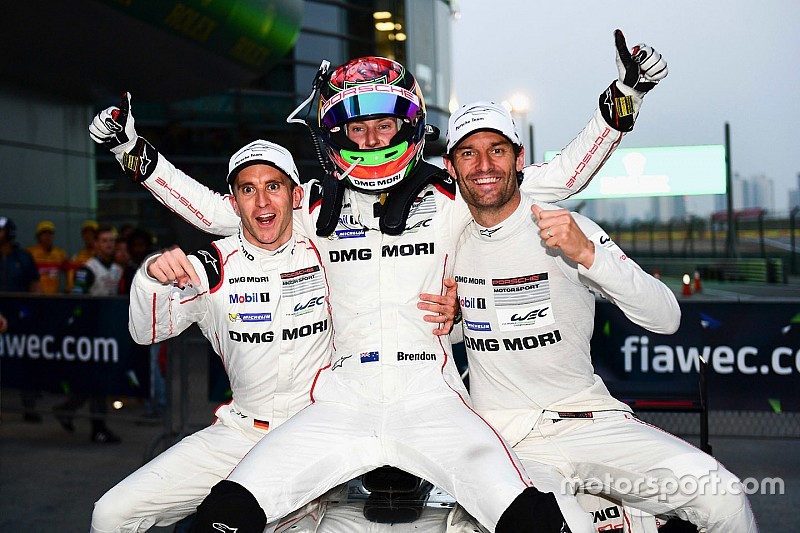 Porsche secured its fourth FIA World Endurance Championship win in five races in the 6 Hours of Shanghai, but a second place for Toyota ensured the race for the drivers' title goes to the final race in Bahrain.

Starting from pole, the #1 crew of Brendon Hartley, Mark Webber and Timo Bernhard were never truly challenged, the trio sealing victory by a minute and clinching Porsche the manufacturers' title to boot.

But a fourth-place finish for the sister #2 car of Neel Jani, Romain Dumas and Marc Lieb behind both Toyotas means that the #6 car of Kamui Kobayashi, Mike Conway and Stephane Sarrazin head to Bahrain with an outside shot at the drivers' title.

The #2 car was in position to potentially take the title prior to half-distance, as it ran second behind the #1 car with Lieb at the wheel, until Kobayashi passed the German for second.

Toyota then seemed on course for an easy second place before the #6 machine had to make not one but two unscheduled stops in the penultimate hour, both times as a result of a slow left-rear puncture.

That meant the battle for third between the #2 Porsche and the #5 Toyota of Anthony Davidson, Sebastien Buemi and Kazuki Nakajima assumed critical importance, with Buemi swinging the pendulum back in Toyota's favour by going ahead of Jani in the fourth hour.

Quicker pit-work gave the #2 Porsche a temporary reprieve, but Jani was powerless to stop both Toyotas going through in the final hour, after the #6 machine in Kobayashi's hands moved back ahead of the #5 following its spate of punctures.

A fuel-only final stop for Davidson in the #5 cemented third for the Briton and his teammates, who took their first podium finish of a campaign dogged by misfortune, as the #2 crew went a fifth straight race without a top-three finish in fourth, 1m40s behind the victorious #1 car.

In its first race since announcing its impending WEC withdrawal, Audi suffered a nightmare race, with the title hopes of the #8 crew of Lucas di Grassi, Oliver Jarvis and Loic Duval being extinguished early on by a malfunctioning fuel rig.

That meant the car had to make more pitstops and lost time with each of them, leaving it a distant fifth place at the flag, three laps down on the victors.

The #7 car of Andre Lotterer, Marcel Fassler and Benoit Treluyer fared even worse, lacking the pace to fight Porsche and Toyota early on before dropping out of contention completely after a collision between Treluyer and Jarvis in the #8 at the hairpin.

That forced the #7 into the garage for around 20 minutes to repair an airjack, although it recovered to sixth overall ahead of the LMP1-L class-winning #4 ByKolles CLM.

ByKolles' first LMP1 privateer win since last year's Austin race came largely thanks to reliability issues for the #13 Rebellion car, which suffered a water leak in the second hour and then set on fire at the start of the final hour.

While the LMP1 title remains up for grabs, Signatech Alpine was able to clinch the LMP2 crown courtesy of a fourth place for the #36 car of Nicolas Lapierre, Gustavo Menezes and Stephane Richelmi.

Lapierre took the class lead at the start, although he was passed by a flying Alex Brundle in the #26 G-Drive Oreca towards the end of the opening hour.

From there, the Jota-run car was nigh-on unstoppable, with Roman Rusinov and then Will Stevens pulling out a big advantage to take a second straight win, 1m20s ahead of the #30 ESM Ligier of Antonio Giovinazzi, Sean Gelael and WEC rookie Tom Blomqvist.

The battle for third was between the first two cars in the points, the #36 Signatech Alpine and the #43 RGR Sport by Morand Ligier, which had earlier earned a drive-through penalty when Bruno Senna punted Menezes into a spin.

Recovering from that setback, Filipe Albuquerque managed to fend off Lapierre in the final hour to take the final step on the podium for the #43 car, but this wasn't enough to keep the title fight alive.

Having taken pole position, the Manor squad endured a wretched race, losing its #45 car at the very first corner after a spin for Mathias Beche, who was then clouted by Richie Stanaway's Aston Martin.

The Swiss driver was out on the spot, while the #44 - started by poleman Alex Lynn - fought in the top four early on before losing several laps due to a spell in the garage to repair a broken trackrod, the result of contact with the #27 SMP car.

In the GTE-Pro division, Ford converted its front-row lockout into a one-two finish, with the #67 machine of Harry Tincknell and Andy Priaulx taking a second successive class win following their Fuji triumph.

As in Japan, the #66 of Olivier Pla and Stefan Mucke ran the sister car closely at first, but dropped back with a slow puncture in the third hour - putting the duo out of sequence with the rest of their competitors.

But such was the pace of the Ford that the #66 car was able to overhaul the #51 AF Corse Ferrari of Gianmaria Bruni and James Calado and the sole surviving Pro class #95 Aston Martin of Marco Sorensen and Nicki Thiim in the second half of the race to finish second.

A first-lap puncture and a late pitlane infringement penalty meant the second of the Ferraris, the #71 of Davide Rigon and Sam Bird, could no better than fifth in class.

The #83 AF Corse Ferrari of Emmanuel Collard, Rui Aguas and Francois Perrodo, however, remains in command of the standings thanks to a third-place finish, surviving a last-lap tangle with the #78 KCMG Porsche amid a fierce race-long battle for second in class.

UPDATE: A post-race penalty for the #78 KCMG car means it remains on the podium but is moved behind the AF Corse Ferrari in the fight for second. As such, Collard, Aguas and Perrodo strengthen their lead in the standings heading into Bahrain.

Ferrari and FIA at odds over BoP claims