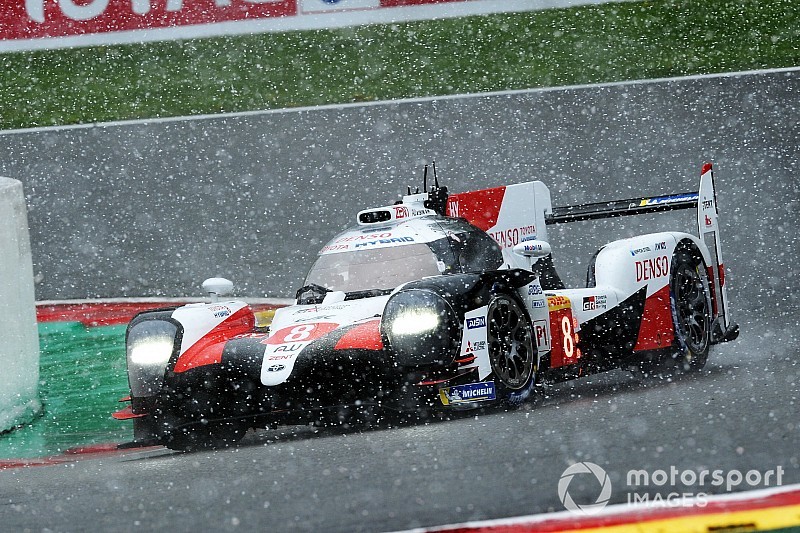 The drivers of the #8 Toyota TS050 Hybrid took a one-lap victory in a race disrupted by four safety car periods and two full-course yellows - and which was finally red-flagged with 11 minutes to run - helped by the sister #7 entry losing a healthy lead with a technical gremlin.

Mike Conway, Kamui Kobayashi and Jose Maria Lopez were over 50 seconds in the clear when they were hit by a failed brake sensor just short of half-distance, necessitating a trip to the garage that lasted 11 minutes and cost them four laps.

They eventually trailed home sixth, meaning Alonso, Buemi and Nakajima take a 31-point lead to the Le Mans 24 Hours next month with only 39 points left to play for.

The #8 Toyota lost ground after the first of multiple snow showers hit Spa, as Buemi was forced into an extra stop early in the second hour because he was not given slick tyres.

That left Buemi trailing by 56 seconds, although Alonso was able to reduce that to 45s during his first stint, despite a spin at Pouhon that co-incided with the start of a VSC.

Kobayashi had edged the gap back up when the problem hit that effectively decided the race, and potentially the destiny of the championship battle.

The LMP1 privateers were afforded a rare chance to fight for two spots on the podium as a result of the #7 car's problems, and it was the #3 Rebellion R-13 shared by Gustavo Menezes, Thomas Laurent and Nathanael Berthon that took second place.

SMP Racing had looked to have taken the upper hand with its #11 BR Engineering BR1 of WEC debutant Stoffel Vandoorne, Mikhail Aleshin and Vitaly Petrov when the Russian squad reacted quicker to changing conditions during a shower in hour four.

However, the penultimate safety car period eradicated the gap between the two cars and Laurent was able to pass Petrov for second.

The #17 SMP car of Sergey Sirotkin, Stephane Sarrazin and Egor Orudzhev dropped a lap to its sister car after shedding its front-right wheel early in hour three.

They managed to recover to fourth place, helped by a spin for Bruno Senna that dropped the #1 Rebellion the Brazilian shares with Andre Lotterer and Neel Jani to fifth.

The ByKolles ENSO CLM P1/01 finished the best part of 40 laps down after a clash with the #37 Jackie Chan DC Racing LMP2 of Jordan King at La Source left the car with significant front-end damage that warranted a long trip to the garage.

The penultimate safety car period brought the #31 Oreca Maldonado shares with Anthony Davidson and Roberto Gonzalez to within spitting distance of the class lead, and Maldonado then picked off Gabriel Aubry in the #38 DC Racing car as well as Nicolas Lapierre's #36 Signatech Alpine entry.

Maldonado established a 10-second buffer out front, which was wiped out by the final safety car period, but the Venezuelan was able to keep his opponents at bay after the final restart before the red flags were shown.

G-Drive Racing's Aurus-badged Oreca shared by Jean-Eric Vergne, Roman Rusinov and Job van Uitert held on for second place ahead of the #36 car of Lapierre, Andre Negrao and Pierre Thiriet.

The #38 car of Aubry, Ho-Pin Tung and Stephane Richelmi was fourth in class, losing ground in the class championship fight to the #36 crew.

Aston Martin scored a second victory of the season with its new Vantage GTE, as Maxime Martin and Alex Lynn took honours in the #97 car.

Martin was able to pull a gap in the wet conditions towards the end of a class battle that ebbed and flowed for its entire distance as different manufacturers gambled on various tyre strategies.

Martin passed Davide Rigon's Ferrari after the penultimate restart and built a lead of 10 seconds over the BMW of Antonio Felix da Costa after Rigon pitted.

But BMW cost itself a likely podium by pitting both its cars in the closing stages, allowing the #51 Ferrari of Alessandro Pier Guidi and James Calado to take second.

Third on the road was the #91 Porsche of Gianmaria Bruni and Richard Lietz, but they were due to serve a drive-through penalty after a clash with the #54 Spirit of Race Ferrari when the race was halted early, and the resulting time penalty dropped the pair to eighth.

It meant the points-leading #92 Porsche of Kevin Estre and Michael Christensen was promoted to the final spot on the podium, putting the pair within touching distance of the drivers' title.

That result was good enough to secure the GTE manufacturers' prize with a race to spare.

GTE Am honours went to the #77 Proton Competition Porsche of Christian Ried, Matt Campbell and Riccardo Pera, some five seconds ahead of the pole-winning #90 TF Sport Aston Martin.

Championship leaders Egidio Perfetti, Patrick Lindsey and Jorg Bergmeister finished fifth in the #56 Project 1 Porsche after a late off at Fagnes.