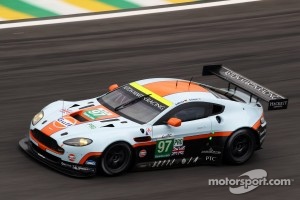 Berlin/Sao Paulo (rol/ot) The German sports car pilot Stefan Mücke started into the second season half of the FIA World Endurance Championship (WEC) with the hoped for podium placing in Interlagos (Brasil) in the night to Sunday (MESZ, 16th of September). Together with his British Aston Martin works driver colleague Darren Turner, the Berlin finished second with the Vantage in the GTE Pro Class at the six hour race of Sao Paulo, which was the fifth season event of the long track world championship. Winners of the race have been Giancarlo Fisichella and Gianmaria Bruni (both Italy) in the Ferrari 458 Italia. The Berlin was on the podium for the fourth time this season and reached the best WEC placing for Aston Martin Racing so far. Earlier he was three times third in the GTE Pro.

„I am really happy about the second position in my class. We were aiming on a podium placing from the beginning. The Vantage GTE was very fast and without difficulty on its way“, Stefan Mücke said, who started into the race from pole position in the GTE Pro, thanks to his team colleague Turner for the good result at the Qualifying. At the first lap of the race the Berlin had to avoid two sports car prototypes, which had a crash and he fell back to position four. „I could make up to positions after that up to position two“, the 30 year old said.

The track cooled down during the race and it has been very slippery and hard to drive on. Mücke and Turner were still very close to the leader of the race and the Berlin even was on first position for a short time. „But the Ferrari needed a pit stop less than us. I am very satisfied with the second position. To be the leader of the race on this traditional and hard to drive course, even if fit was for a short time only, has been a great experience. That gives additional courage and hope for the next four races and to get the class victory.“ The sixth season event of the WEC will be the six hour race in Bahrain on the 29th of September.

Near flawless performance for Greaves Motosport LMP2 in Sao Paulo