Prost, Jani, and Rebellion Racing were among the top honorees at the ceremony in Paris. Also recognized was the Starworks team and driver Potolicchio. AF Corse and Larbre Competition team took GTE honors.

Today in Paris the Champions from the inaugural season of the FIA World Endurance Championship were honoured in a glittering ceremony at the Pavillon Champs-Elysees.

The guests were reminded of the eight round championship with a short three minute video that relived some of the highlights of the year before the trophies were presented to the top teams and drivers in the five categories – LMP1, LMP1 Privateer, LMP2, LMGTE Pro and LMGTE Am. 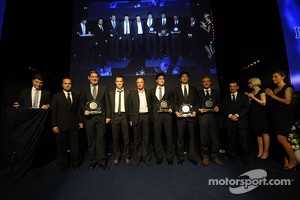 Rebellion Racing and their drivers Nicolas Prost and Neel Jani won the top honours in the LMP1 Privateers class, Starworks Motorsports and driver Enzo Potolicchio won LMP2, AF Corse and Giancarlo Fisichella were top in the LMGTE Pro class while Larbre Competition won the Team trophy in LMGTE Am but Team Felbermayr Proton drivers Christian Ried, Gianluca Roda and Paolo Ruberti lifted the drivers trophy in the GTE Am class.

Gerard Neveu, CEO of the FIA WEC, said: “Last week we travelled to Istanbul to celebrate the world champions at the FIA Gala and tonight is the end of season party to celebrate all the teams and drivers who took part in the first year of the FIA WEC. I would like to congratulate each and every team and driver for the contribution they made in making the World Endurance Championship a huge success in 2012 and look forward to seeing them in 2013 for an even better year. I would like to take this opportunity to wish our partners, sponsors, officials, teams, drivers, members of the media and the fans a very Merry Christmas and a Happy New Year.”