Thriller in the Ardennes – second, third and sixth for Porsche 919 Hybrids 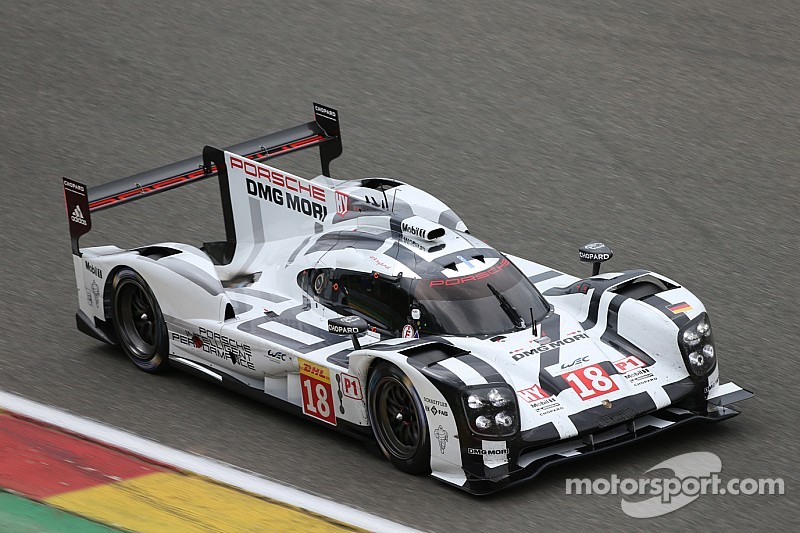 Neel Jani: "We were fighting hard and in the end just didn’t manage to win that race."

Stuttgart - After an action packed six-hour race in Spa-Francorchamps, the trio of Romain Dumas (France), Neel Jani (Switzerland) and Marc Lieb (Germany) came second at round two of the FIA World Endurance Championship (WEC). This is a repeat of the season’s opening race in Silverstone. Timo Bernhard (Germany), Brendon Hartley (New Zealand) and Mark Webber (Australia) had started from pole position, dropped back due to a penalty and a technical failure, but fought their way back to finish third.

The third Porsche 919 Hybrid with Earl Bamber (New Zealand), Formula One driver Nico Hülkenberg (Germany) and Nick Tandy (Great Britain), that was being entered for the first time, started second but lost ground because of an accident which was followed by a stop for repairs. They recovered after dropping to the back of the field to finished sixth.

How the race went for car number 17

Hartley took the lead from pole position. Just before he was due to hand over the car to Bernhard after 23 laps, he locked the brakes before the bus stop chicane and used the escape road to get back onto the track. He was given a 15 second stop and go penalty, which saw the car drop back to second place, before a damper change during the driver change to Webber after 47 laps cost even more time. Webber managed to improve to third during a double stint. After 95 laps Hartley took over, refuelled after 119 laps and handed over to Bernhard after 137 laps. Bernhard came in for his final stop for fuel after 161 laps and finished third.

How the race went for car number 18

Lieb improved from third on the grid to second right after the start and stayed there. After 22 laps he handed over to Jani, who moved up to first place when the sister car received a stop and go penalty. Dumas got in the car after 46 laps and extended the lead to 27 seconds. After 94 laps Lieb returned to the car and re-joined the race in second. He had a strong fight with Benoït Tréluyer for the lead, which changed several times. After 133 laps he handed over to Jani. He had his last splash-and-dash after 157 laps and finished the race in second place.

How the race went for car number 19

Tandy started second and was third after lap one. On lap seven a misunderstanding led to an accident with one of the works Porsche 911 RSRs, and required a stop for repairs. After 32 laps Hülkenberg took over the car in ninth position for a double stint. After 80 laps Bamber got behind the wheel for the first time. He refuelled after 104 laps and handed over after 128 laps to Tandy, who picked up fresh tyres for the left hand side at his last stop for fuel after 152 laps before he finished sixth.

Quotes after the race

Fritz Enzinger, Vice President LMP1: “That was an extremely exciting and turbulent race for us. At the beginning we had a one-two-three lead before an unlucky accident. But with the two podium finishes and sixth we have achieved our target to finish the race with all three cars. We were absolutely up to speed. The result speaks for itself when first and the second are separated by only a few seconds after a six-hour race. We also once again made progress in terms of reliability. We are on the right path for Le Mans and look forward to the great challenge. I take my hat off to the entire team – especially to the third crew and our three new drivers. They integrated themselves into the team very well and were competitive right from the beginning.”

Andreas Seidl, Team Principal: “For the moment I must admit there is a feeling of disappointment. After having locked out the front of the grid with a one-two-three in qualifying, for sure we would have been able to win that race if it had all gone according to plan. Regarding the crew of car number 19, we can say: mission accomplished. The drivers completed all their race stints, and this was the main target to get ready for Le Mans. A big thank you to the pit crew who successfully managed two repairs in the garage during today’s race. After it all, I would say we have managed the challenge to enter three Porsche 919 Hybrids for the first time. We have finished the race with all three cars and took two out of three available podium places. This means valuable points for the World Championships.”

Drivers Porsche 919 Hybrid number 17: "Timo Bernhard (34, Germany): “Our car had a great start to the race from pole position and we were leading, despite a stop and go penalty, until that suspension problem required a stop for repairs. However, we never gave up and gave our utmost to at least reach a podium finish.”

Brendon Hartley (25, New Zealand): “At the end of my first stint I had a front brake lock and was struggling to slow the car down before the bus stop chicane. I tried to bring the car back onto the track safely when I went through the escape road. However, we received a stop and go penalty for this. Then we lost more time because of the rear damper change, but I think it was a very good recovery drive and effort from the team to move into third place. I did a double stint on the tyres and had to protect them in the first half. I think on average the lap times were good.”

Mark Webber (38, Australia): “Having a mechanical problem is never nice, and we lost a lot of time. In the first part of my double stint I didn’t quite find a good rhythm, but in the second half it was a bit better. I think today’s result is not what we were aiming for, but at least we were fighting strongly.”

Drivers Porsche 919 Hybrid number 18: Romain Dumas (37, France): “In the beginning of my stint I found it a bit difficult because I had had very little driving in the dry here. But then I managed to increase the lead over André Lotterer in the Audi and this was good fun.“

Neel Jani (31, Switzerland): "My first stint today was almost uneventfull. I took over the lead from the sister car and didn’t have pressure from behind. My second stint was a bit unlucky: In almost every lap I had traffic in Eau Rouge, but this was our strongest sector and, therefore, we lost a lot time due to the traffic. Racing is like this sometimes. We were fighting hard and in the end just didn’t manage to win that race. But the car was really good today.”

Marc Lieb (34, Germany): “I had a good start, was able to improve to P2, but not follow Brendon in what was then our leading car. Later when I was in the car again it was a lot more fun out there. Because the regulation limiting the supply of tyres we did a double stint, but it didn’t quite work out with the tyre wear. It was a great battle with Ben Tréluyer and quite a moment when he hit me in the rear going down to turn nine, but that’s racing. To strike back we have some work to do in terms of tyre management.”

Drivers Porsche 919 Hybrid number 19: Earl Bamber (24, New Zealand): “We tried to fight back after we dropped down the order, and we ended up in sixth. For us it is most important to get ready for Le Mans next month and the experience in traffic is part of it. I’m used to traffic from the U.S. racing, but the new element is the speed and having to overtake all the time. The car was handling very well and I enjoyed it a lot.”

Nico Hülkenberg (27, Germany): “I felt good in the car during the race. I did a double stint with one set of tyres, which was tough on the rubber. Managing the traffic was a very interesting and enjoyable experience, although I had a few moments. Sometimes the timing to overtake is perfect and sometimes it isn’t.”

Nick Tandy (30, Great Britain): “The accident with the Porsche 911 RSR early in the race was a misunderstanding. I obviously thought he would let me by and he clearly didn’t expect me to overtake. Then we had a technical problem with the car, which caused me to miss the pit lane entry and we lost more time. Of course, I’m not happy with how things went, but the car was great to drive and the tyres were holding up better than expected. Thanks to the team for a great job.”