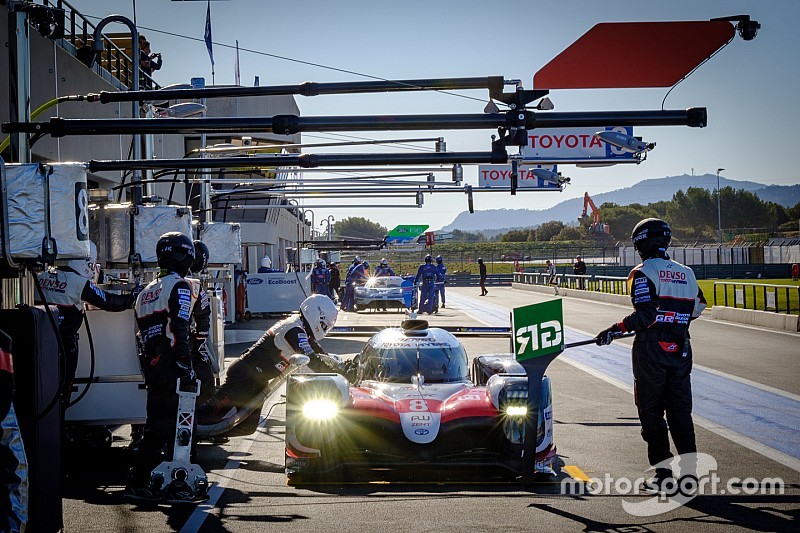 Toyota has revealed that its TS050 Hybrids did not conform to the rules to set its quickest times during the FIA World Endurance Championship Prologue test at Paul Ricard on Friday.

The Japanese manufacturer has confirmed that it did not respect the Equivalence of Technology for the opening session of daytime running for "development reasons".

That meant it ran more than the 5.27 kilowatts of hybrid energy and the 58.9 megajoules of fuel energy allowed per lap laid down in the EoT for the test.

Toyota has introduced a new cooling system for the 2018/19 WEC superseason, which suggests that it wanted to put this under greater stress over the course of a test held in mild conditions.

There is no requirement at the Prologue for cars to conform to the EoT and Toyota notified the WEC of its intention to run outside of the EoT.

The TS050s started running according to the EoT just before the end of the day session on Friday afternoon.

Mike Conway had set a test best of 1m32.662s prior to that in the high-downforce version of the TS050, which put Toyota more than five seconds up on the best of the non-hybrid privateer LMP1s at the time.

Anthony Davidson had set a 1m34.655s in the low-downforce version of the car on Friday afternoon. This car, the only of the two Toyotas that run through the night, did not dip below 1m38s in that time.

The best non-hybrid time so far is a 1m37.034s set by Vitaly Petrov in the best of the AER-powered SMP Racing BR1s late on Friday night.

The revelation comes against a backdrop of concerns raised by the privateers that attempts to balance the non-hybrid independents with the Toyotas have failed.

Rule-makers the Automobile Club de l'Ouest and the FIA have made a promise of laptime parity to allow the privateers to compete on near-equal terms with Toyota in the 2018/19 campaign.