Both Toyotas slowed by 2.7s a lap at Shanghai

Both of Toyota's LMP1 cars will be slowed to the tune of 2.74 seconds per lap in next weekend's Shanghai FIA World Endurance Championship round, it has been confirmed.

The latest bulletin issued by the FIA Endurance Committee shows both the #7 and #8 Toyota TS050 Hybrids with identical success handicaps, as they are both on 44 points.

It implies a small increase in the co-efficient used to calculate the penalties, which was set at 0.012s per point ahead of the last-placed LMP1 car in the standings (up to a maximum of 40) per kilometre of track length for the last race in Fuji.

While the weight of the Toyotas will remain capped at 932kg, as per the previous round, other measures such as reducing the available ERS power per lap, decreasing in fuel flow and reducing the size of the fuel restrictor have been taken.

Fuel flow is limited to 74kg/h, a reduction of 2.4kg and 3.4kg respectively compared to the last race, while the fuel restrictor diameter is now 19.6mm for both cars. The fuel allowance on the other hand has increased to 51.3MJ/lap to reflect Shanghai's longer track length.

The measures ensure the two Toyota crews will be able to fight with each other on equal terms after a one-sided battle at Fuji tilted in favour of the #8 crew.

Sebastien Buemi, Kazuki Nakajima and Brendon Hartley enjoyed a theoretical 0.4s a lap advantage in Japan over teammates Mike Conway, Jose Maria Lopez and Kamui Kobayashi as a result of the #7 drivers taking the win in the Silverstone season opener.

For the non-hybrid LMP1 cars, only the weight of the cars has been changed of all the various parameters available to organisers.

The #1 Rebellion R-13 shared by Bruno Senna, Gustavo Menezes and Norman Nato will be slowed by 0.89s a lap in comparison to the so-called 'reference car', which remains the #6 Ginetta G60-LT-P1.

This will be achieved by an increase in minimum weight from 825kg to 862kg.

Ginetta's #5 car - in which Jordan King will make his WEC LMP1 debut alongside Ben Hanley and Egor Orudzhev - will be slowed by 0.65s a lap, a small decrease compared to Fuji, and as such its weight has dropped by six kilos to 861kg for Shanghai.

The sister car of Guy Smith, Charlie Robertson and Mike Simpson has no penalties and will run at 833kg.

The 4 Hours of Shanghai qualifying and race will be shown live on Motorsport.tv here. 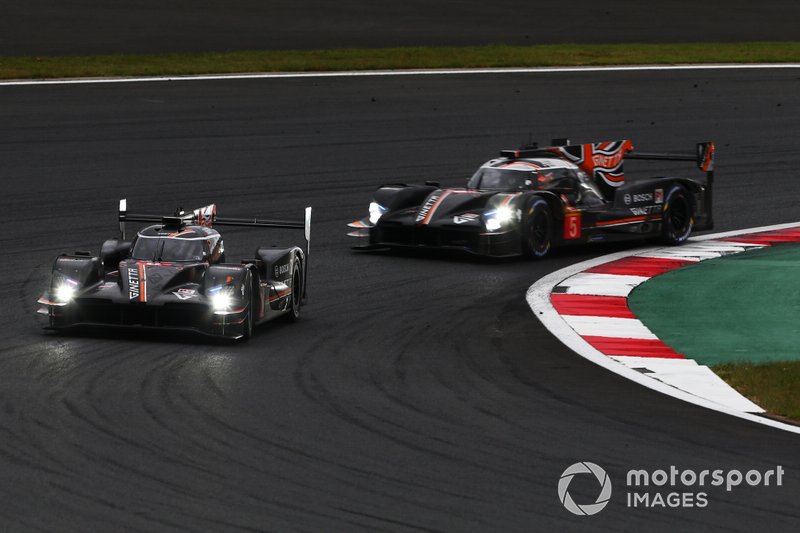 Hartley "surprised" by gap between Toyotas at Fuji