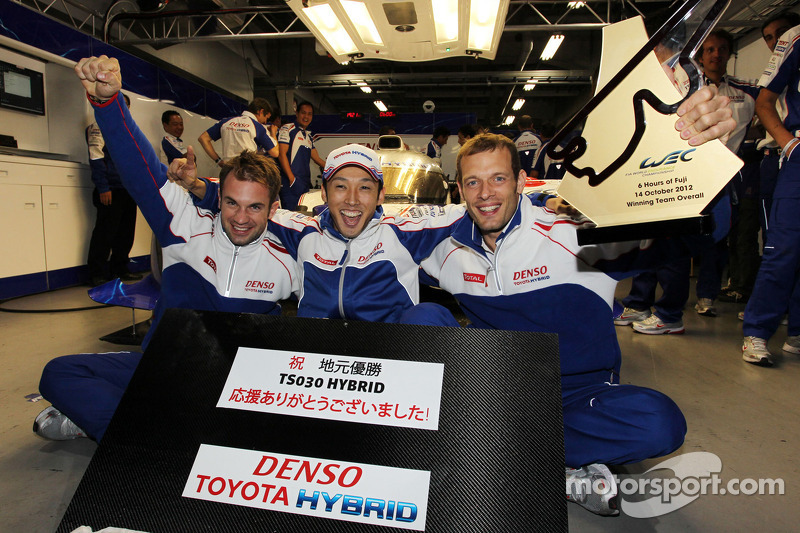 The Toyota Racing #7 TS030 Hybrid earned the win in their homeland’s FIA World Endurance Championship race despite having to dive into the pits with less than 20 minutes remaining on the six hour clock. Kazuki Nakajima and the crew were fast at the quick splash of fuel. He returned to the Fuji circuit still in the lead but the time was cut down to 6.3 seconds over the #1 Audi R18 e-tron quattro. Third went to the #2 Audi R18 e-tron quattro.

“What a day! It is a great achievement and it was a team effort so many thanks to my team-mates and the team, who prepared a great car, as well as everybody at TOYOTA who prepared such an impressive hybrid system. We all achieved this together. To win a world championship race as a driver has been my aim for my whole career so it is a great day,” Nakajima said with a smile!

This is an extremely special day.

Nakajima, Alex Wurz and Nicolas Lapierre will no doubt savor their second win out of the five races they have contested this season. Sao Paulo was the site of their maiden victory.

“This is an extremely special day,” Wurz said. “We promised to fight for the win but Audi made it very difficult. This win is the result of an enormous team effort, from Japan to Cologne. From the start of the weekend everything was targeted on race balance and strategy; we executed it and got the result we wanted so big thanks to the team.”

The battle in the 6 Hours of Fuji was interesting; especially in the LM P1 class. When Toyota had the lead, they ended up losing it and the same goes for the two Audi R18s. At times the fight was so intense that the drivers made errors that included off-track excursions. Yet in the end the top three “hybrid” cars were still in control of the overall outcome; despite the privateer LM P1s giving it their best shot to land an overall podium.

Near the end of the six hour contest, the gap was very close between the top three. While the gap increased in the closing laps when the checkered flag ended the challenge in Japan, it was still close. Just over 11 seconds between Toyota and the #1 Audi. 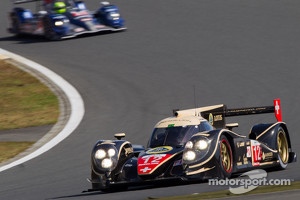 “It was a tight fight with Audi,” stated Lapierre. “We knew at the end we had to take an extra pit stop so Kazuki had to push really hard, which he did very well. We are very happy to win here. Since the beginning of the year everyone has been speaking about how important this Fuji race is for TOYOTA and we made it.”

André Lotterer, Marcel Fässler and Benoît Tréluyer had to settle for second. They had hoped to wrap up the Drivers’ title but due to their teammates Allan McNish and Tom Kristensen taking third in the #2 car, the title will be determined at the season finale.

Adding to the delight of the Japanese fans was the #12 Lola B12/60 Coup powered by Toyota. REBELLION Racing took the privateer honors in the LM P1 category. Neel Jani and Nicolas Prost were able to keep the HPD cars behind them, and at the checkered flag, the Swiss team earned the coveted FIA Endurance Trophy in the Privateers team category.

JRM won the battle of the HPD ARX 03a Honda prototypes when their drivers David Brabham, Karun Chandhok and Peter Dumbreck came home fifth overall and second for the privateer teams. That left Jonny Kane, Nick Leventis and Danny Watts to take third in the #21 Strakka Racing Honda.

In LM P2, they too had hiccups, along with brilliant moves by the drivers who are the top contenders for the class title in the penultimate race. Starworks Motorsport s did not have an easy race but in the end Enzo Potolicchio, Ryan Dalziel, and Stéphane Sarrazin came home second to clinch the class championship for the team in the #44 HPD ARX 03b Honda. 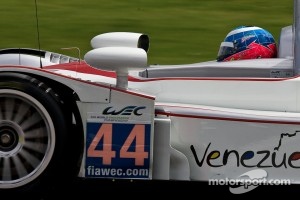 First in LM P2 at Fuji was the #25 ADR-Delta Oreca 03 Nissan with John Martin and Tor Graves getting to celebrate on the top step of the class podium. Jacques Nicolet, Matthieu Lahaye and Olivier Pla ended third in the OAK Racing was #24 Morgan Nissan.

GTE Pro class win went to Team Felbermayr Proton who continued to dominate the weekend in Japan. The #77 Porsche 911 RSR team was unstoppable as they landed the GTE overall victory.

GTE Am winning team also was a dominate force to reckon with and. Larbre Competition did not fail placing their #50 Corvette C6-ZR1 on the top step of the podium.

The #57 Krohn Racing took second in their Ferrari F458 Italia. Third went to the Team Felbermayr Proton in their #88 Porsche 911 RSR.