© 2021 Motorsport Network. All rights reserved.
TV Tickets Fashion Giorgio Piola Jobs
Previous / Stefan Mücke wants to reclaim the lead at the WEC race in Shanghai Next / Rebellion Racing back to Asia for the 6 Hours of Shanghai
WEC Preview

The 2013 season of the FIA World Endurance Championship enters its final stage when the series will start this Saturday for the seventh and penultimate round of the season at Shanghai/China. With two rounds to go, Young Driver AMR still has chances for World Championship honours in the GTE-Am class after a victory in the most recent round in Fuji/Japan. 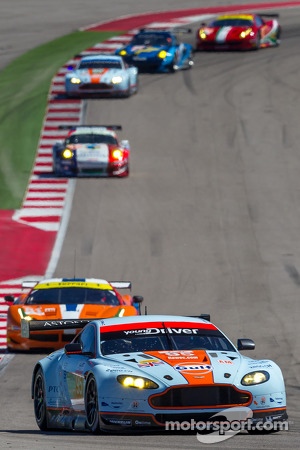 The Formula One track of Shanghai is new ground for all three "Young Drivers“. "Neither one of us has been to Shanghai yet“, Kristian Poulsen says. "But that will not be a big issue, as most of the other tracks have been also new for us. The Aston Martin should be really quick at Shanghai, according to the results of last years race, were Aston Martin won. So we travel pretty confident to China."

After scoring the second win of the season in a rain shortened race at Fuji/Japan recently, Nygaard and Poulsen are fourth in the drivers championship, 26,5 points behind the championships leaders with 52 points still up for grabs in the final two rounds at China and Bahrain.

"It will not be very easy, we certainly need some luck“, Poulsen says. "We will give our best and will try to win the two remaining rounds. What happens then is not in our hands. The last round at Fuji was halted due to heavy rain and only half points were awarded. This hurt our championship ambitions badly. If we would have won the race in regular style with full points, it would look a bit brighter now.”

Young Driver AMR has a successful record in China. At the last appearance of the team in China, at a FIA GT1-World Championship round in 2011, Young Driver AMR took a dominant double victory in both races with their par of Aston Martin DBR9´s.

Rebellion Racing back to Asia for the 6 Hours of Shanghai