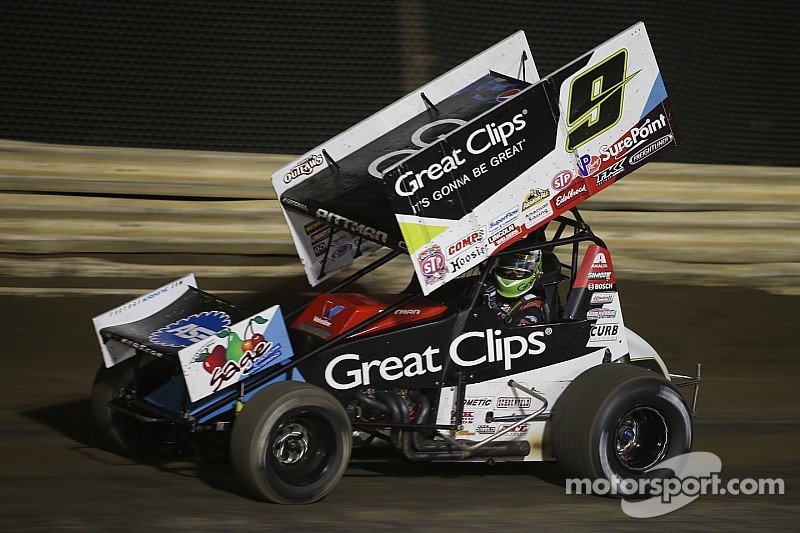 Through Sunday night's 30 lap World of Outlaws Sprint Car Series feature at Antioch Speedway, Paul McMahan tried everything he could think of to get around leader Daryn Pittman. McMahan tried the high line and the low line; he got side by side with Pittman off of turn four and even briefly worked his way past Pittman. In the end though, Pittman held off McMahan to score his second series victory of the season.

"This is for my crew - this Great Clips team is just incredible," Pittman said. "You know how good of a race team you're part of when… you go to race tracks that aren't part of my forte and places I don't normally excel at and they continuously give me cars that are capable of going out and winning with."

Pittman, who started on McMahan's outside, jumped to the lead on the start. As Pittman worked to build up a lead in the opening laps, McMahan chased him down, challenging him on every inch of the track. While the two drivers battled for the lead, Kerry Madsen pushed his American Racing Custom Wheels car up to third and then into contention with the two drivers.

Madsen found an opening on lap six, clearing McMahan's CJB Motorsports car in turns three and four to take over the second spot. The move was short lived however as McMahan battled past Madsen one lap later. A determined McMahan then set his sights back on Pittman, whom he quickly caught.

"I could hear him," Pittman said of McMahan. "He wanted it pretty bad. You could hear he was running the car quite a bit harder than I was."

Through laps nine, 10 and 11, McMahan tried to find a way around.

The only caution of the night flew on lap 11, as Justyn Cox slowed and then came to a stop on the backstretch.

He beat me on the start and got out front and that was the key.

When the field returned to green, the battle between Pittman, McMahan and Madsen continued. On lap 15 it looked like McMahan may have finally found his path to the lead. He got a run on Pittman off of turn two and drag raced the No. 9 car down the backstretch. As the two dove into turn three, McMahan cleared the leader. Pittman slid his No. 9 car through the turn though and took back the lead.

Madsen got in on the act four laps later as Pittman and McMahan caught lapped traffic. Madsen tried to slide the two cars through turns three and four, but he was not able to hold on to any gained positions.

As Pittman fought his way through lapped traffic in the final laps, McMahan continued his quest for a way around Pittman. But ultimately, he came just short.

"I think we were better than Daryn - it's just that the place is so narrow that I would get a big run on him and there's just nowhere to go anymore," said McMahan, who closed out the night in second. "He beat me on the start and got out front and that was the key."

"The track was in great shape. It was real wet and made for an exciting race. I just needed a few more lapped cars. My car got real tight there at the end and I couldn't run the line I was with everybody on the bottom throwing that wet stuff up around the top. When it comes down to the start, I lost it.

Pittman agreed with McMahan that the initial start was the key for success in the night's event. As he wheeled his way around the track, the lapped traffic that McMahan sought was making Pittman nervous.

"Everybody was so fast and I just didn't want to make a mistake, and I could hear him breathing down my neck but I didn't know how hard to push," Pittman said. "So I was just trying to make a clean race. I haven't been able to put together 30 good lap many times this year so luckily we were good enough.

This was Pittman's second win of the season. He is just the third different driver - joining Rico Abreu and Donny Schatz - to score more than one win so far this season.

After battles throughout the night, Madsen stood on the front stretch in third at Antioch.

"It was a fantastic weekend for us. We led some laps and we actually got into second tonight but Paul drove back around me," Madsen said. "And he was driving pretty aggressively there and I was quite happy to finish in third place tonight."