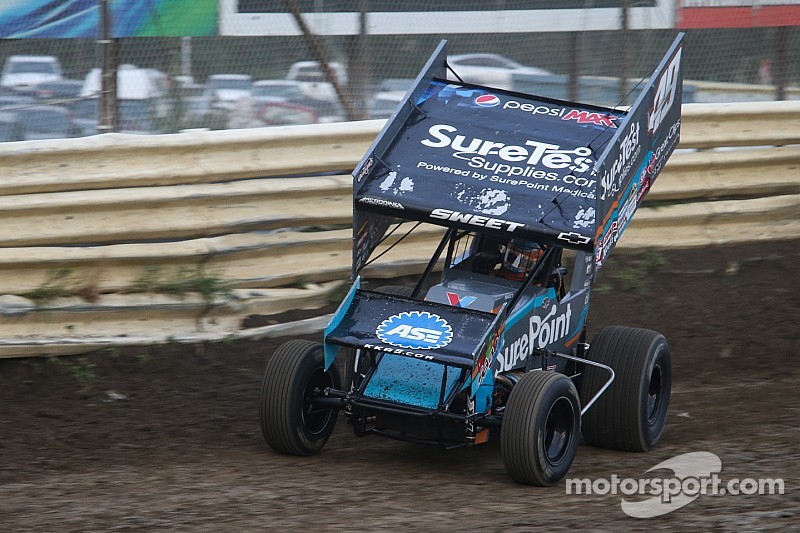 Brad Sweet, the 2014 Kevin Gobrecht Rookie of the Year, gave his team its final feature win of sprint week after battling Paul McMahan.

Sweet started the A-main in fifth and quickly began his ascension through the field. He drove his Ollie's Bargain Outlet car to third following the scrum on the first lap and got past Kerry Madsen by lap five to take over the second spot. One lap later he was battling McMahan for the lead.

We were knocking on the door all weekend so it's nice to end it on a high note.

As the two rounded turns three and four on lap 7, Sweet took the bottom line and passed McMahan for the lead. The move was short-lived though.

"I was a little mad at myself because I passed him and then I let him pass me back," Sweet said. "So I thought I gave it away because then I showed him the bottom and he was able to kind of get going."

McMahan retook the lead with his CJB Motorsports car and began working his way through lapped traffic.

Farther back, Sweet's KKR teammate Daryn Pittman was in pursuit of Madsen and the third position. Pittman caught the No. 29 car on lap 10 and began the battle for the spot. Pittman caught Madsen off of turn four and the two were side-by-side as they crossed the start/finish line. The battle continued into the first turn with Pittman taking over the third spot in his Great Clips car. After another lap of back-and-forth where Madsen attempted to use a lapped car as a pick, Pittman held him off and secured the position.

McMahan attempted to extend his lead through the middle third of the race but Sweet began bearing down on him. Using the bottom line in three and four, Sweet took over the lead from McMahan on lap 22.

"It got tight there toward the end and allowed Brad to get by," McMahan said.

Eight laps later, Sweet added another piece of hardware to KKR's collection from the week.

"It's just one little mistake - the grease kept coming back in three and four and then it would go away for a few laps and then come back," Sweet said. "So it was just searching down there to try to figure it out but my guys gave me a great car. We were knocking on the door all weekend so it's nice to end it on a high note. Really nice to come out and start the season this strong for KKR as a whole and especially our team."

Daryn Pittman, who came home third in the night's feature, was crowned the 2015 DIRTcar Nationals Sprint Week champion. Pittman bested his nearest competitor Kerry Madsen by 14 points after five nights of racing that saw him take home two feature wins - the first in Thursday night's UNOH All Star Circuit of Champions event and the second in the World of Outlaws Sprint Car Series season opener on Friday night. It was Pittman's second DCN championship win.

"That's a tough trophy to win and this is a tough track to come and start your season out on," Pittman said. "It was a great week all the way around. We just put ourselves in position every night to get a good finish."

Sweet echoed Pittman in assessing the positive impact of the week on the team's confidence and performance moving forward.

"We started strong last year and I understand how grueling the season is going to be," Sweet said. "I think we're more prepared than we've ever been and really looking forward to trying to battle Daryn and Donny and few of those other guys for the championship this year."

A disappointed McMahan, who closed out his DIRTcar Nationals run with a second place finish in the night's feature, said his team had finally gotten his car where it needed to be but the finish was not what he had hoped for.

"Definitely not where I want to be," McMahan said. "I wanted to be in victory lane tonight. Everybody here at CJB Motorsports busts their butt to give me a great racecar and I let them down tonight. It's a positive way to end the weekend the way we started all week and as bad as we were to come back and be up here in the top two is a good day."

The World of Outlaws Sprint Car Series returns to action on March 4 and 5 at the Dirt Track at Las Vegas. The event begins a West Coast swing for the series that lasts through mid-April.