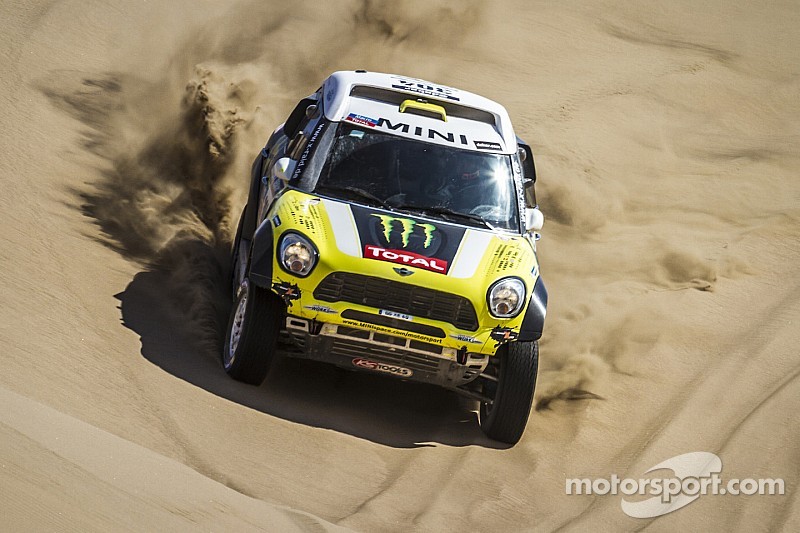 Munich (DE). In his striking yellow MINI ALL4 Racing, Joan “Nani” Roma (ES) has won the sixth round of the 2014 FIA World Cup for Cross Country Rallies. After four demanding special stages and 666.13 competitive kilometres during the 2014 Baja Aragón the Spaniard and his co-driver Michel Périn (FR) claimed the victory for the Monster Energy X-raid Team ahead of team-mates Orlando Terranova/Moi Torrallardona (AR/ES), Martin Kaczmarski/Tappio Suominen (PL/FI) and the current World Cup leader Vladimir Vasilyev/Konstantin Zhiltsov (RU/RU) who were also competing in MINI ALL4 Racing cars.

Last year, it also was a trouble-free event for me. So being able to repeat last year’s victory definitely feels good.” With three consecutive Dakar Rally victories to its name, the MINI ALL4 Racing which is based on the MINI John Cooper Works Countryman was able to put his trademark strengths on display again during the Baja Aragón. Reliablility, speed and durability were the keys to success on the demanding gravel roads in the northeast of Spain.

After a mixed start into the rally when Roma finished eighth, the reigning Dakar champion quickly bounced back on the first special stage by being the fastest driver of the 61 starters which also got the Spaniard the overall lead. On special stages 2 and 3 he continued to convincingly extend his lead to 1:37.0 minutes on his team-mate Terranova. During the fourth and final special stage Roma decided to take a controlled approach to ensure the victory.

In the World Cup’s overall standings Vasilyev and the MINI brand (183 points) hold a commanding lead over Yazeed Al-Rajhi/Timo Gottschalk (QT/DE, 120 points), who had to retire on special stage 2 of the event, in second and Nasser Al-Attiyah/Matthieu Baumel (QT/FR, 114 points) in third who finished the Baja Aragón eighth. The next World Cup event is the 2014 Baja Hungary (14/08 – 17/08).