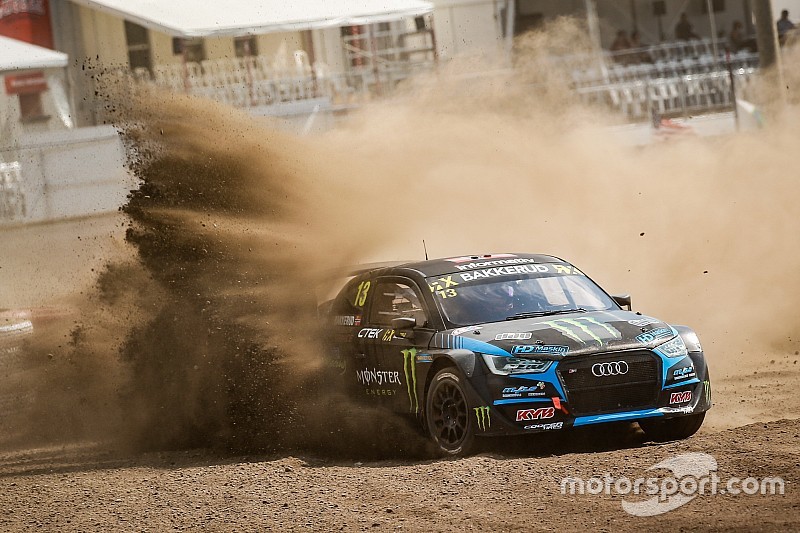 Andreas Bakkerud launched himself into the middle of the World Rallycross title fight at Trois Rivieres, with his first victory for three years.

Bakkerud started on pole position for the final in Canada, thanks to a lights-to-flag victory in semi-final two, before the Norwegian then repeated the performance in the main event to score his first win since the Argentine round in 2016.

Bakkerud capitalised when the event’s dominant force, Niclas Gronholm, made a poor start from pole in semi-final one and didn’t make the final. That meant as next highest qualifier, Bakkerud claimed pole position, the Audi S1 campaigner taking the lead to head Janis Baumanis and Timur Timerzyanov on the opening lap.

While Baumanis applied pressured on the first tour, the Latvian driver dropped off the lead chase on lap 2 as he defended his position from Kevin Hansen, who had started on the third row of the grid having dragged his Peugeot into the final from ninth at the end of qualifying.

Moving to fourth on lap one, Hansen passed Timerzyanov’s Hyundai when the Russian took an early joker, before the GRX driver was then passed by Swede Anton Marklund when he hit a tyre wall at the end of the lap and lost time.

Hansen jokered on lap three, arriving into the joker merge side-by-side with Marklund, and the GCK driver’s Renault Megane was forced into the concrete wall on the outside and out of the race.

A lap later, while Baumanis took his compulsory extra-route on the loose-surface section, Hansen spun his points-leading Peugeot, which appeared to have lost drive to the front wheels, Timerzyanov climbing into a podium position.

Untroubled up front, Bakkerud took his joker on the sixth and final tour and returned to the main circuit with the advantage to claim the win and move to second in the standings, now just seven points off the lead.

Timmy Hansen meanwhile dropped to third in the points. The Swede made an uncharacteristic mistake in Q2 by going off and hitting a tyre wall on his own, then got caught in contact between Bakkerud and Timerzyanov at the first corner of his Q4 race.

Later in the same encounter, while Hansen attempted an overtake on Timerzyanov, Liam Doran in front had a half spin due to a puncture, the three drivers getting stuck together on track and losing time. Hansen came off worst, his Peugeot suffering front suspension damage and failing to make it into the semi-finals.

For the first time GCK had two of its Renault Meganes in the final, team owner and driver Guerlain Chicherit twice setting second-fastest times in qualifying and taking fourth in the Intermediate Classification. However, he was slowed by an issue in the main and finished fourth after passing the ailing Hansen in the closing stages.