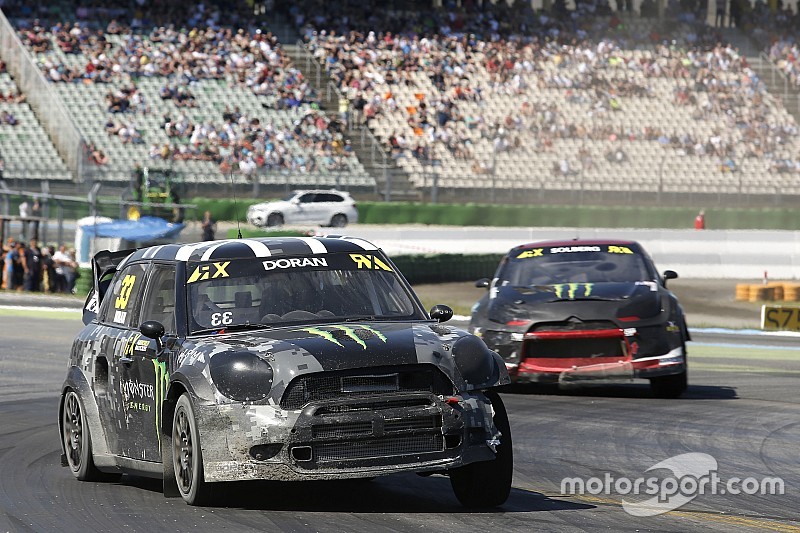 British World Rallycross driver Liam Doran is hoping for a power increase in time for his home round of the championship at Lydden Hill in the UK next week.

Doran is racing a Mini RX for the JRM Racing team this season, having switched from a Citroen DS3 run by his own squad and has been using a WRC-derived 1600cc engine in the car in the first three rounds of the year.

Despite having approximately 100 bhp less than the two-litre Supercars in World RX, Doran has twice qualified for the semi-finals and started on the front row of the grid for the final in round two at Hockenheim.

The British team, which ran a number of drivers in selected outings last season, are currently putting the finishing touches to a second Mini RX fitted with a newly developed two-litre engine for Doran.

“The plan is to have the two-litre engine in for Lydden, but we’re not going to promise anything because we were supposed to have it already, but it is what it is,” said Doran.

“The car isn’t bad as it is, so we’ll just keep using it until we know the new car, because its another car altogether, is faster and as reliable. There’s no point in bringing it out if it’s faster but not as reliable.”

The all-British team will run back-to-back test of the new and existing setups ahead of Lydden round.

“Until we know it’s no slower anywhere, we won’t switch to it. We’ve got to keep all the strengths we’ve got now and only work on the weaknesses.

"We’re strong on the gravel at the moment, everyone can see that, so I’m not going to use the new car until I know that it is as strong as the current one on the gravel, so it will only give me an advantage on the tarmac from what I’ve got now.

"We’re looking to try and get to winning pace; we’re not far from it now. I had the opportunity to be on the podium in Hockenheim if it wasn’t for getting hit in the final, so we can definitely do it,” he added.

European championship event winner Doran says the performance of both the car and himself has exceeded his expectations in the opening events of the year.

“We’re way, way ahead of my expectations. At the start of the year it was maybe try to get a final and maybe a podium by the end of the year.

"Now a final is in reach quite easily if I drive well and the car works well. We just need to change our game plan a little bit because we’re far more competitive than I expected to be.

"So this two-litre engine has to come in and perform perfectly without any floors because otherwise it will set us back from the position we’re in now,” he said.

The British driver thinks that World RX is currently one of the most competitive championships in motorsport.

“It would be a nice confidence booster being able to come to an event knowing we’ve got a really fast car," he continues.

"That doesn’t at all make it easy because this is still the hardest championship in the world I think, with some of the best drivers and everybody has a good car.

"But it gives you the best opportunity you can have to compete. Reliably and consistency is key to this year, the first two rounds showed that for me 100 percent."