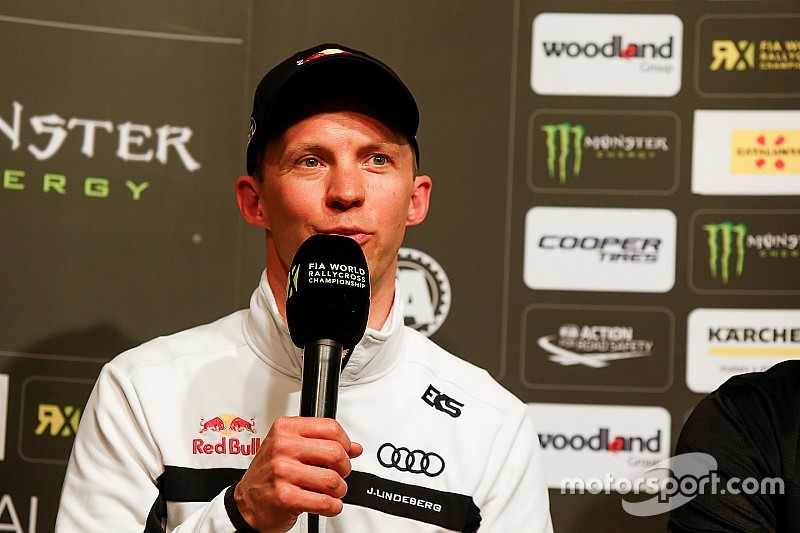 Mattias Ekstrom has been stripped of his World Rallycross season-opening win at Barcelona for the first-corner contact that forced polesitter Petter Solberg out of contention.

The Audi driver's disqualification from the final at the Spanish Grand Prix venue hands victory to reigning champion Johan Kristoffersson.

Ekstrom and Solberg ran side-by-side into the first corner of the final, with Solberg forced into the tyre wall on the inside and spun out of contention.

“[Car] #5 [Ekstrom] did not respect car #11 [Solberg], located at his left after the start, causing a collision of #11”, a stewards' bulletin stated. “Having reviewed the video evidence and heard from both competitors and drivers, the Stewards consider that car #5 moved left and made contact with car #11 on his left.

"Car #5 continued to move left, which forced car #11 off-track, causing him to collide with track markers at the entry of Turn 1, and get stuck. Further, the Stewards considered this to be a dangerous manoeuvre and liable to hinder car #11.”

The change in result, with Ekstrom not classified in the list of finishers, moves the five other finalists up a position, with Sebastien Loeb now second and Andreas Bakkerud scoring a top three result on his first outing for Ekstrom’s EKS squad.

Niclas Gronholm and Solberg are promoted to fourth and fifth respectively, while the points for victory move Kristoffersson into the lead of the drivers’ standings by three points from Solberg.

Ekstrom’s disqualification is from the final only. His points from the intermediate and semi-final stages of the event still stand, leaving him fourth in the drivers’ table.