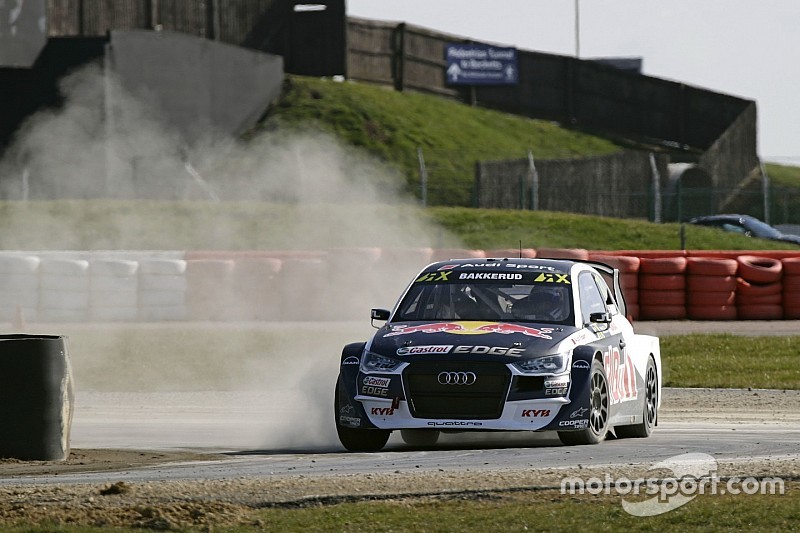 Mattias Ekstrom’s EKS Audi Sport team was fastest in both wet and dry conditions at the second and final official World Rallycross Championship pre-season test at Silverstone this week.

Running its 2018-spec S1 Supercar in public for the second time, having revealed the car at the Loheac World RX test earlier this month in France, Ekstrom was joined at Silverstone by new teammate, Andreas Bakkerud.

With the test split into four sessions over Monday and Tuesday, only once did the EKS squad not top the order.

Newcomers GCK set the pace on Monday morning with the brand new Prodrive-built Renault Megane RS RX, in the hands of European Championship race-winner Jerome Grosset-Janin, with a time of 42.792s.

But, as the loose surface sections of the new Silverstone circuit cleaned in the afternoon, it was Ekstrom who set a new benchmark, his 41.601s some 1.191s faster than Grosset-Janin’s time.

Wet conditions greeted the teams on Tuesday and Ekstrom was again fastest in the morning session, but with a time almost 1.5s slower than his previous best.

Petter Solberg posted the second best lap, 0.419s adrift, while Guerlain Chicherit was third in a strong debut public outing for the Megane.

Although the conditions dried for the afternoon running, the Northamptonshire circuit remained slippery, with Bakkerud topping the table on a 44.807s, some way short of the best times set on Monday.

Despite topping the order, with the first eight drivers covered by 1.5 seconds at the end of the two days, double DTM champion Ekstrom says he’s pleased by more than just the performance of the EKS outfit’s new car.

“We have some new individuals in the team so for us it’s not only the times that make me most happy, it’s that we have a new group of people starting to work well together.”

Ekstrom and Bakkerud completed a total of 136 laps at Silverstone. “The biggest gain for us is just to drive the car because we’ve had so few days driving with our new car. We need every kilometre we can get.

"For us it has been a very important test because we found stuff out that we haven’t found out before.”

Asked how much of a step his Audi-backed squad has taken with its new 2018 car, Ekstrom told Motorsport.com: “I’m one thousand percent sure [that this car is quicker than the previous version], the question is just by how much.”

A notable absentee from the test was Marcus Gronholm’s GRX squad, but the team has begun testing its new WRC-derived Hyundai i20 Supercars behind closed doors.