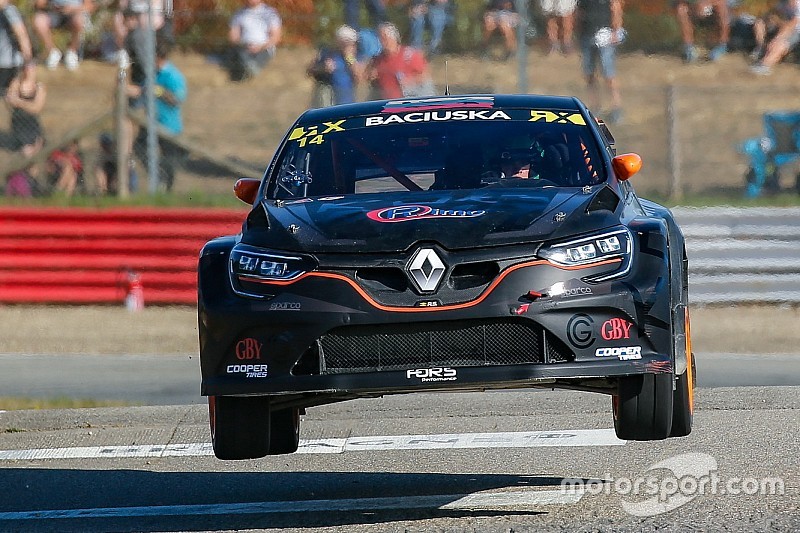 The Lithuanian finished second on the road to Gronholm RX driver Toomas Heikkinen in the opening session of the weekend to set the fifth best time, then climbed to second at the first corner of the first race in Q2, before taking the lead and race victory after the joker laps played out.

Double DTM champion Timo Scheider had made a near-perfect launch to take the lead of the same encounter in Q2 but finished second in the race and on the time sheets to hold third at the end of the first day, just behind Heikkinen.

The Finn, who tested the GRX Hyundai for the first time at Mayenne on Tuesday, returns to World RX for a one-off outing and was fastest in Q1. He was sixth on the Q2 time sheets, one place behind team mate Niclas Gronholm but remains second overnight, with Gronholm in sixth.

Winner of the Norwegian round, Gronholm led the final race of Q1 from pole, but was passed by Timmy Hansen at the end of the opening tour, Hansen missing out on the fastest time by less than half a second.

Of the three drivers most likely to be fighting for the title in the final three rounds of the season, Hansen sits highest in the Intermediate Classification in fourth, one place ahead of Canadian round winner Andreas Bakkerud.

Hansen lost out at the first corner of his Q2 race and could only manage eighth fastest, while younger brother and championship leader Kevin Hansen twice started from the outside grid slot.

He was held up in Q1 then made a better launch in Q2 to beat closest title-rival Bakkerud into turn one, but was hung out to dry on the outside by EKS Sport’s Krisztian Szabo and ran fifth on the opening tour.

Kevin Hansen is 11th at the end of Saturday, one place ahead of Szabo and behind Anton Marklund, who battled with Bakkerud for track position in Q1.

Bakkerud meanwhile is ahead of GRX pairing Gronholm and Timur Timerzyanov and Latvian Janis Baumanis in the overall order, Baumanis having been second to Scheider in their Q1 race.

British driver Liam Doran couldn’t pull off a planned around-the-outside move at turn one in Q1 but made a brilliant start in Q2 to comfortably take the race lead on the opening lap and be fourth fastest, putting him ninth overall.

Latest ES Motorsport signing, Russian autocross racer Matvey Furazhkin had a challenging opening day. He hit a type bale in the second corner in Q1, damaging the front of the Skoda Fabia. He then chased ex-WRC driver Jani Paasonen in Q2 to set 18th best time.