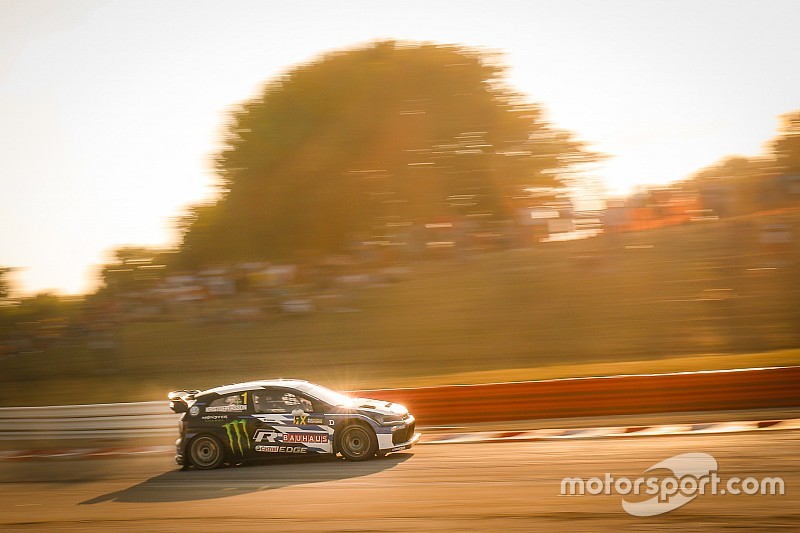 World Rallycross points leader Johan Kristoffersson topped the day one order in France, despite a slow start in Q2 forcing him to fight his way through the field.

Having begun with fastest time in Q1, Kristoffersson started on pole position for the last race in Q2, but took a risk with the launch RPM settings in his PSRX Volkswagen Polo and made the slowest start of the grid.

Meanwhile, Audi driver Andreas Bakkerud just avoided jumping the start as the lights went green and led the pack into Loheac’s turn one, but Kristoffersson had already fought his way back into the pack and ran side-by-side with Peugeot driver Sebastien Loeb for the opening two corners.

Kristoffersson then immediately took his joker at the first opportunity, ahead of Loeb’s teammate Timmy Hansen, before clearing PSRX teammate Petter Solberg when the Norwegian took his joker on the next tour.

With Kristoffersson closing them down, Bakkerud and Loeb took their extra routes on lap three, Loeb dropping to the rear of the field while Kristoffersson emerged behind Bakkerud.

But when the Audi S1 pilot made a mistake in the final corner of the lap, Kristoffersson needed no invitation to take the lead and win the race.

Kristoffersson leads overnight ahead of Ekstrom and Bakkerud. Third in Q1 and seventh in Q2 leaves Solberg fourth, one place ahead of Timmy Hansen, who passed the Norwegian in the final corner of their Q2 race.

However, despite introducing a new car for round six in Sweden and then scoring a double podium at the last round in Canada, Peugeot drivers Hansen and Loeb are fifth and sixth at the end of day one in Loheac, Loeb’s fourth place in Q1 the best of the times set by the 208 drivers.

Niclas Gronholm again displayed his ever-improving level with second fastest in first Free Practice and seventh at the end of day one while of the returning drivers, Liam Doran tried an outside move in Q1 on his debut in the GC Kompetition Megane RS RX and had a first lap battle with Kristoffersson.

A pair of solid times leaves the British driver 10th overnight, one position ahead of GCK team mate Guerlain Chicherit. Fellow Brit Andrew Jordan was 12th quickest in Q1 but was spun by Gregoire Demoustier in Q2 and dropped to 15th at the end of the opening day.

Audi to withdraw from World Rallycross