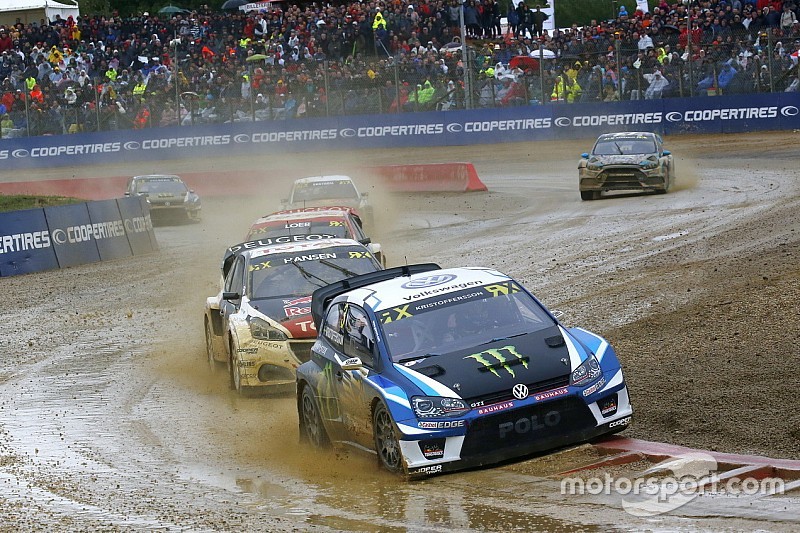 Johan Kristoffersson dominated the semi-final and final stages in the French round of the World Rallycross Championship to claim victory.

In a day of consistent rain causing the specialist French circuit to become increasingly treacherous, Kristoffersson's Polo Supercar was the only car to maintain a clear windscreen in the six-lap final, as he made the best start from pole position.

At the circuit's hairpin on the opening lap, an unflustered Kristoffersson defended the inside line from compatriot Timmy Hansen, the Peugeot-Hansen driver having used a superior joker lap strategy to win the second semi-final and join Kristofferson on the front row for the final.

Behind the leading pair on the opening tour, day one leader Loeb ran third, as Mattias Ekstrom and Petter Solberg immediately took their joker lap.

Hansen lost second position to Loeb on the second tour at the hairpin, the 2015 Loheac winner running wide allowing his team-mate to move up.

Two laps later at almost exactly the same point, Hansen slowed before retiring, Ekstrom passing on the inside with an unsighted Andreas Bakkerud just avoiding the rear of the 208 to pass on the outside.

Loeb took his joker on the penultimate tour and remained second, while Kristoffersson cruised to yet another impressive win, crossing the finish line with a margin of over 3.5 seconds after his final-lap compulsory extra route.

But, having attacked the joker lap chicane kerbs hard on the last tour, by the time Kristoffersson made it to parc ferme, the front-left tyre on the Polo had deflated.

Ekstrom completed the podium, a further second behind Loeb, the reigning champion's first rostrum appearance since winning round three at Hockenheim.

Bakkerud had made a good start from the third row of the grid but lost out in the first corner and eventually finished fourth, with Solberg making it to the end of the race in fifth, slowed from the second lap with problems.

The double World RX champion concluded the race with the front-left tyre on his Polo having parted company with the rim.