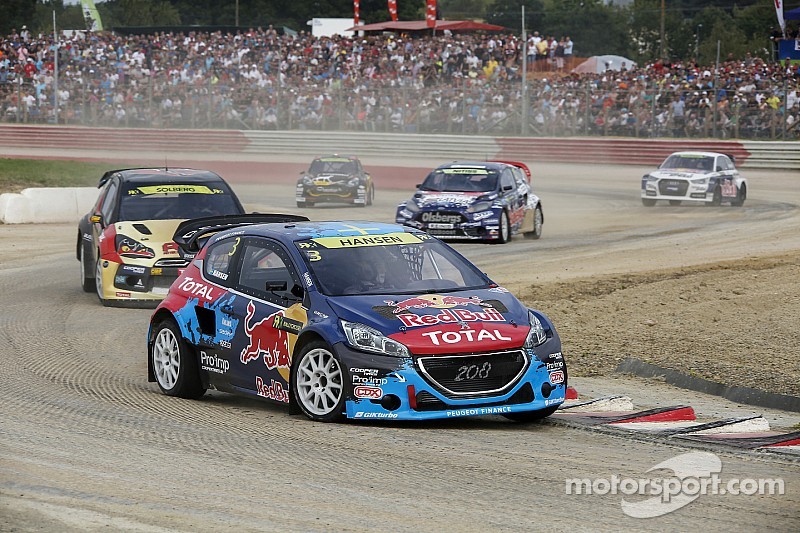 The Peugeot-Hansen driver was third quickest in heat one and followed it up with a heat two victory.

Timmy Hansen has established an early lead at the World RX of Turkey, the penultimate round of the FIA World Rallycross Championship presented by Monster Energy, being staged at the Istanbul Intercity Park. The Peugeot-Hansen driver was third quickest in heat one and followed it up with a heat two victory. Volkswagen Marklund’s Topi Heikkinen is currently second with Ford Olsbergs MSE wildcard driver Richard Goransson third.

Hansen, who won the previous RX round in Italy, clocked the fastest time during free practice in his Peugeot 208 Supercar. The 21-year-old Swede also set the quickest heat time of the day in heat two, beating Heikkinen’s heat one victory by 1.5 seconds.

I love this track – it’s very technical with a lot of gravel.

“I’m feeling really comfortable in the car here - I love the dirt section, it reminds me a lot of driving on ice back in Sweden because it’s so slippery,” explained Hansen. “The track overall is fantastic but I think the key to winning here is getting a good time in the gravel section. We made no mistakes on the dirt today and that definitely helped.”

After what is only his second outing in a Supercar, Swedish Touring Car driver Richard Goransson looks set to challenge the World RX front-runners once again. “I’ve had a really fun day,” admitted Goransson. “I love this track – it’s very technical with a lot of gravel. There’s a lot to learn but thankfully I have two very talented team-mates [Reinis Nitiss and Andreas Bakkerud] that I can speak to and analyse the data with.”

Fourth overnight in another Fiesta Supercar is Bakkerud. Fifth place is occupied by PSRX driver Petter Solberg who spoke of small issues with the car and difficulties with handling on the slippery dirt section. EKS RX’s Edward Sandstrom is eight overnight after a solid performance in the Audi S1 Quattro Supercar.

It was good to line up beside my dad in heat two but then I was fired off into the wall on turn one.

Team-mate PG Andersson did not get off to the best start after the EKS RX squad were forced to change the car’s engine after free practice which saw the Swede miss heat one. Andersson made up for lost time, however, after posting the second quickest time in heat two.

Elsewhere Timur Timerzyanov had a troubled day after handbrake problems in heat one and tearing the left-rear wheel off his car after an impact in heat two. Monster Energy World RX Team’s Henning Solberg is ninth overnight with team-mate Lars Oivind Enerberg 15th after the Norwegian suffered turbo failure during heat two. LD Motorsports frontman Derek Tohill lies tenth overnight in his Citroen run DS3, happy with his performance through today’s heats.

“We had a lot of work to do on our car after Italy and I’m pleased to say the guys have done a great job because the car is working better than it has in a long time. I really like this track, it’s very different from Italy and it suits my driving style. It’s been a good day,” concluded the Irishman.

Albatec Racing’s father and son duo Andy and Marc Scott are 11th and 12th overnight. “Today I’ve been finding my feet,” explained Scott Jnr. who is making his World RX debut this weekend for the British-based team. “It was good to line up beside my dad in heat two but then I was fired off into the wall on turn one. I’d be really happy to make it to the semi-finals tomorrow. I know it’s a tall order but that’s my aim.”

Top qualifier in the RX Lites Cup is Swede Sebastien Eriksson. Super1600 race winner Janis Baumanis made his first start in RX Lites this weekend but rolled his car in heat one. The Latvian managed to make the restarted race and lies third overnight. Italy RX Lites winner Daniel Holten is second while Kevin Eriksson hopes for a strong result to end his championship-winning season and sits fourth overnight.

Tomorrow’s World RX action will commence at 0930 local time with two more heats across the Supercar and RX Lites Cup. The semi-finals and finals will start from 1430, with the finish podium scheduled for 1550.