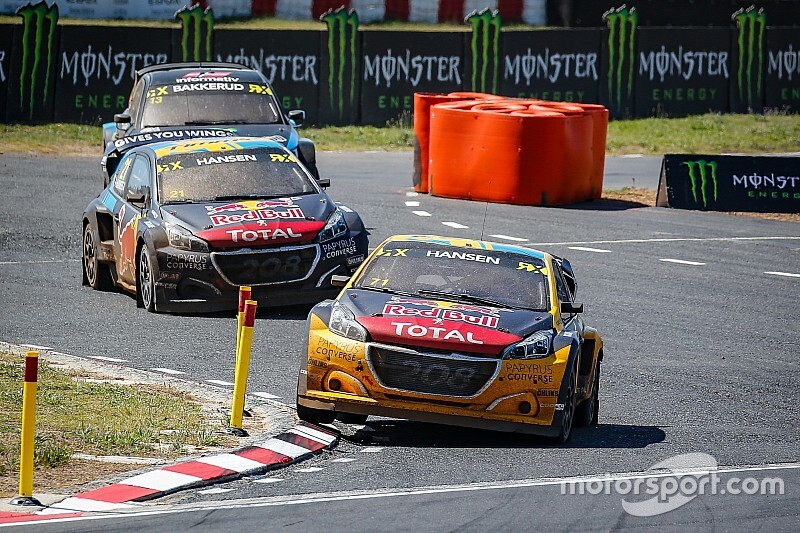 Reigning World Rallycross champion Timmy Hansen will remain with the family-run Hansen team to defend his title this year alongside younger brother Kevin, Motorsport.com can reveal.

The squad will run under the Team Hansen banner for 2020 and continue to field its ex-works Peugeot 208s.

While the programme remains similar to last year, it will be run completely from Hansen Motorsport’s Swedish workshops in Gotene, rather than being based partially in France, for the first time since 2013.

“Of course I’m happy to be back, I like to drive rallycross,” reigning champion Hansen told Motorsport.com.

“It’s been really hard work again this winter, but thanks to Red Bull that they’ve continued to support us after a great year last year, we are very happy to be on the start line and excited to get going."

Along with the change in location for the team, there has been a change in personnel too, which will continue to be headed by Kenneth and Susann Hansen, and lead engineer Graham Rodemark.

“This year will look quite different for us, but I’m very happy with the team we have put together,” continued Hansen. "I think we’ll be ready for the first race even better than last year.

“I’m familiar with the car, which is helpful. I was happy with it last year and I don’t have to get to know a new car with new behaviour, so I’m diving right into my comfort zone.”

Hansen says that having achieved his goal of winning a world championship last season, claiming the drivers’ title in a dramatic season finale in South Africa and with four victories to his credit, he is more relaxed heading into 2020.

“I’m extremely motivated, but I can do it in a more relaxed way,” he said. “That’s going to be in my favour. I’m going to drive the best that I can, I’m going to enjoy racing and for me that’s the best way to go fast.

"Of course it would be nice to be a two-time champion, but now I can just focus on what I love to do. I think this year I’m going to be stronger, I feel much composed and focused in a very good way.

"I hope and believe this will be my best year. But, we will do our best and see where we are at the end of the season.”

Younger brother Kevin won the season-opener in Abu Dhabi last year, led the points’ race during the campaign and took the title-fight to the last round with his sibling and Andreas Bakkerud.

Having finished third in the standings, the former European champion has been focusing on the minor details for 2020.

“I’m excited knowing we were the ones to beat last year and the ones everyone is wanting to beat over the winter,” he told Motorsport.com.

“For me last year was really good, finally I was able try and challenge at this level. I wasn’t expecting to be so high up in the world championship, it took me a bit by surprise, but after a winter reflecting on that I’m ready. I know what I need to improve.

"We have been working a lot on the small details and for that reason I think we will be even more competitive this year.”