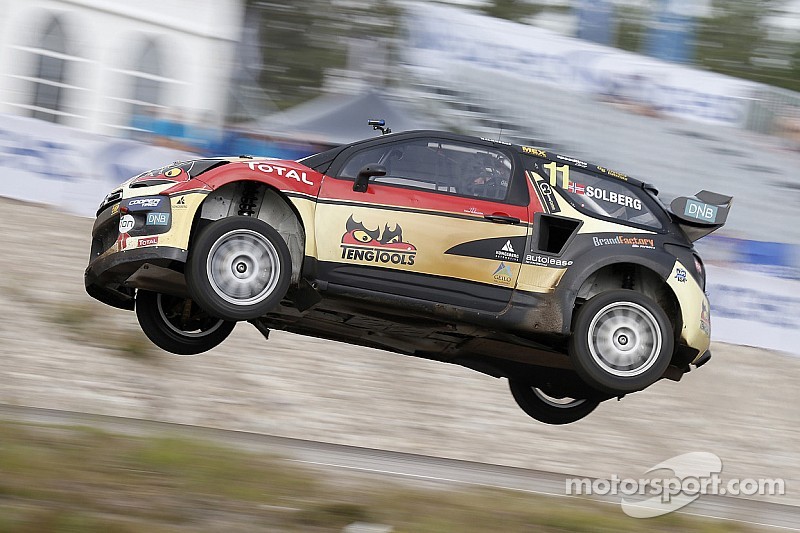 Timmy Hansen took the heat one victory and also the fastest lap time of the day.

Johan Kristoffersson is leading World RX of Italy after finishing as top qualifier at the half-way point in the Intermediate Classification stage. Timmy Hansen took the heat one victory and also the fastest lap time of the day for Team Peugeot-Hansen. Volkswagen Marklund Motorsport’s Anton Marklund is third making it three Swedes at the head of the field.

“What a day, I am very relieved to be in seventh after the day I have had I can tell you,” explained Solberg who can win the World RX title this weekend if he extends his Championship lead to 60 points. “At the end of free practice, there was an oil leak as the engine block had cracked. We didn’t have time to change it during the heats so we took off the gearbox to try and fix the crack as best we could.

I had the throttle stuck on full but I got the fastest time so maybe it wasn’t such a big problem after all!

During the last heat I broke the left-rear damper and then got a puncture so I was lucky to finish ninth. We have a big job ahead – we need to change the engine and the turbo. We need to look at the gearbox and dampers too, it will be a big night ahead but tomorrow is a new day and I have an amazing team so I’m confident they will do a good job tonight.”

After a near-perfect day in a VW Polo including the heat two victory, Kristoffersson was delighted to hold second overnight in what is only his fourth World RX outing. Kristoffersson also leads the FIA European Rallycross Championship (Euro RX), of which Italy is the final round. The Swede explained: “I’m really enjoying myself here – the track suits me and the car very nicely. In the second heat, I had some technical problems as I had the throttle stuck on full but I got the fastest time so maybe it wasn’t such a big problem after all!”

To be racing against the likes of Petter who I know from my rallying days in WRC is amazing.

Fourth and fifth are occupied by Championship contenders Topi Heikkinen and Reinis Nitiss. However Nitiss’ team-mate Andreas Bakkerud was not placed so well. The Norwegian incurred a double Joker Lap penalty for a jump-start and was later excluded for exceeding track limits.

Second in Euro RX and on track for securing the European trophy which concludes in Italy this weekend is Sweden’s Robin Larsson in the Audi A1 Supercar.

Arguably the most impressive drive of today was that of local driver Gigi Galli who excelled on his World RX debut with Ford Olsbergs MSE to lie ninth overnight. “I am really happy to be here, and also a little surprised,” admitted Galli who helped to design the RX circuit at Franciacorta.

“To be racing against the likes of Petter who I know from my rallying days in WRC is amazing. My aim here is to learn, to enjoy myself and to do my best. The car was perfect today so now I continue to learn tomorrow and hope to go as far as I can in front of my home fans.”

Daniel Lundh currently tops the TouringCar standings, and has done his title chances no harm on day one. After three heats he is third overall. Anders Braten was third fastest twice and fastest in the third heat to top the order, with Per Magne Royas in second.

In Super1600, Latvian Janis Baumanis is on top after leading all three heats. Denis Salikov is second, with Russia’s Nikita Misyulya third. Series leader Sergej Zagumennov is seventh overnight but with a 24-points lead looks set to wrap up the title tomorrow provided he keeps his nose clean.

First time in Italy since 1980

Over 80 drivers started the tenth round of World RX, which is being staged at the all-new RX venue of Franciacorta International Circuit in Northern Italy. The event marks the first time that rallycross has been staged in Italy since 1980, when the Gropello Cairoli circuit was included as a round of the FIA European Rallycross Championship.

Tomorrow’s World RX action will continue at 0800 local time tomorrow with free practice across all classes. Heat four for Super1600, TouringCar and RX Lites will run from 0915 and will be closely followed by the two remaining heats for Supercars. Semi-finals and the all-important finals across all categories will follow in the afternoon.