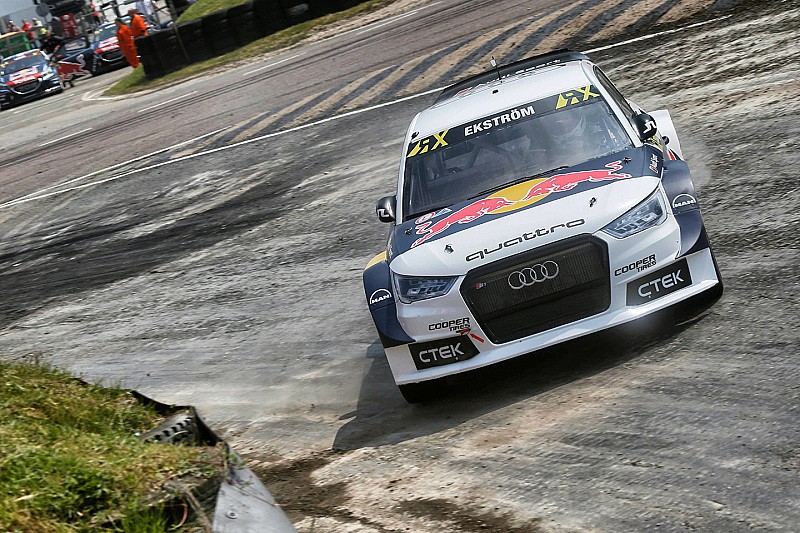 Championship leader Mattias Ekstrom made it three victories from the first fourth events of the season by snatching victory from title rival Petter Solberg at Lydden Hill.

Solberg had dominated the weekend until the final, finishing top at the Intermediate Classification and winning the first semi-final to start on pole position for the final, joined by points leader Ekstrom on the front row.

Solberg made a good start to lead into the first corner, while Ekstrom dove directly into the extra route joker lap, the pair splitting their strategies.

Timmy Hansen followed Solberg into the first corner, Chessens Drift, chased hard by his younger brother Kevin, who made it into the final for the second time in his career short Supercar career.

Having pushing his eight allocated tyres hard though the event, held in warm temperatures in Kent, Solberg couldn’t break away from the Hansen brothers in the opening laps, as Ekstrom set about hunting the leading trio down.

Solberg and Kevin Hansen took their extra-route joker laps on lap four, Solberg returning to the main circuit third, behind Ekstrom and new leader Timmy and when the older of the brothers took his joker on the final tour, Ekstrom jumped into the lead with Solberg second, the finishing positions from 12 months ago at the British circuit reversed for the top two.

“I think the secret here was losing last year, because the motivation of losing against Petter is the worst, I have to say,” joked Ekstrom.

“Every time he wins he smiles and says ‘congratulations, good job’, but I am second and not so happy.”

“This is probably the hardest weekend so far in my rallycross career, because even though everything was spot on, and felt that’s it, you jump out of the car and look at the time sheets, and Petter is going quicker.

"It was a little bit up and down; we were so close on the time. I think the semi-final and final actually came down to tyre strategy and I think I had a little bit more of my tyres left, that’s what made the difference.”

Timmy scored his first podium of the season in third with Kevin achieving his career best result in fourth.

Andreas Bakkerud had been quick all weekend in the Hoonigan Racing Division Ford Focus RS RX and made the final by finishing second in semi-final two to Ekstrom, but made a poor start due to a technical issues that lasted for the whole race as he finished sixth.

Russian driver Timur Timerzyanov also had a strong weekend to make the final and followed Ekstrom into the joker on lap one, only to pick up power steering issues that plagued his World RX Team Austria Fiesta for four laps, eventually crossing the finish line just in front of Bakkerud.

Sebastien Loeb didn’t make it into the final, starting on the third row of semi-final two he tried a move around the outside into the first corner but ran fourth on the opening lap, before taking his joker on lap two and later being slowed by a problem.