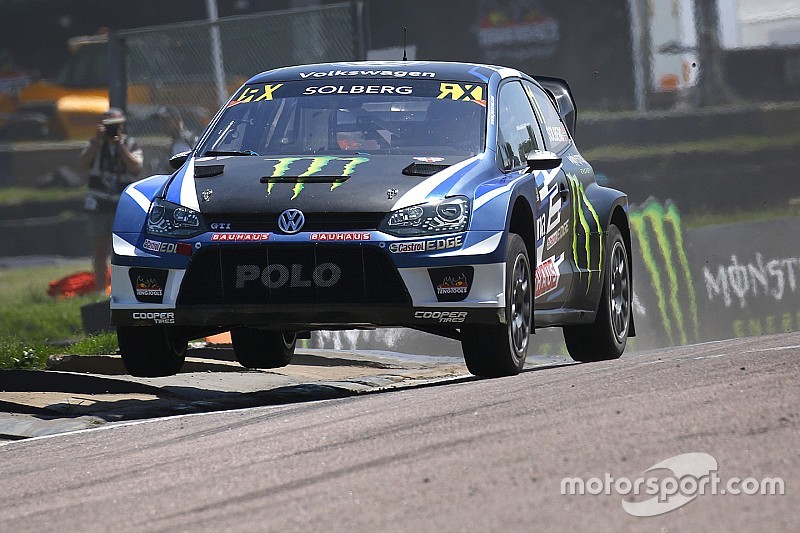 On the Championship's last visit to the Kent venue before it switches to Silverstone, double champion Solberg was fastest in Free Practice, Qualifying 1 and Qualifying 2, trailed each time by teammate Johan Kristoffersson, who won last time out in Belgium.

In both qualifying sessions, Solberg led the pairs' races from the front, each taking their alternative route jokers on the final lap to claim a brace of one-two finishes, in blazing hot sunshine.

Reigning champion Mattias Ekstrom was twice third fastest in Q1 and Q2, some way back from the leading Volkswagens, but happy with the management of his Cooper tyres on the abrasive Lydden circuit.

Remarkably, the top five drivers in the overall Q1 and Q2 sessions on total time respectively were in the same order, With Solberg heading Kristoffersson, Ekstrom, Bakkerud and Hansen.

Hansen's team-mate Sebastien Loeb was sixth in the overall order, one place ahead of Ken Block's Focus. Block and Loeb battled closely in their Q2 race, Loeb having taken his joker on lap three, Block taking his joker on the final tour. They finished one-two.

After the finish flag, Loeb then completed an additional full lap, adding an extra lap of wear to his allocated tyres.

Loeb had already won his Q1 race, whle Block finished third in his.

BTCC champion Andrew Jordan was fastest of all after practice, on his first rallycross outing since the Italian round in 2015, and ended the session eighth.

Making his debut for the MJP Racing Team Austria squad in a Ford Fiesta,  Jordan was tenth in Q1 and ninth in Q2 to be ninth at the end of day one. He only sat in the car for the first time for Free Practice.

Jordan's compatriot Guy Wilks ran with a pair of new tyres on the left hand side of his Volkswagen Polo to combat tyre wear issues in Q2 and is 12th overall overnight, the final spot to qualify for the semi-finals.

Niclas Gronholm, son of double World Rally Champion Marcus, rolled his M-Sport built Ford Fiesta in Q1 after clipping the tyre wall on the inside of the first corner but the car was repaired in time for Q2, where he set 10th fastest time to begin his fightback up the order to 16th.

Ekstrom's EKS teammate Toomas Heikkinen was eighth quickest in Q1, but was slowed in Q2 with a sick sounding engine. He did make it to the finish however and is 14th overall.

The same couldn't be said for the third EKS Audi. Reinis Nitiss won his Q1 race but forgot to take his joker lap and was handed a 30 second penalty as a result.

Starting in the first race of Q2, the Latvian was squeezed into a track marker on the inside of the entry to the first corner, damaged the S1's front suspension and retired. He is last overall.

Kevin Hansen, racing the Peugeot his brother Timmy used in World RX last year, after he severely damaged his own shell with a roll at the previous round in Belgium, retired in Q2 with a driveline problem.