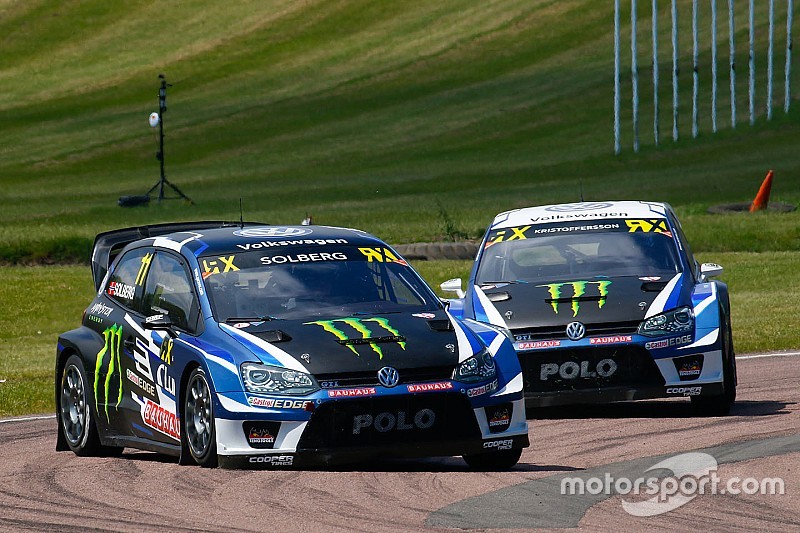 Petter Solberg claimed his first victory in over a year by winning the British round of the World Rallycross Championship, on the series' final visit to Lydden Hill.

Solberg won semi-final one by using an unusual tactic of taking his joker on the second lap and fighting his way back into the lead when those ahead took their compulsory alternative routes.

The Norwegian started on pole positon in the final and led into Turn 1 as his PSRX Volkswagen Sweden teammate Johan Kristoffersson took his joker on Lap one from the outside of the front row.

Kristoffersson was followed into the joker by Sebastien Loeb, who only just made it to the grid after his team were forced to rectify a cooling problem between the semi-final and final.

Ford Focus driver Andreas Bakkerud took the lead when Solberg took the alternative lap, as Timmy Hansen (Peugeot) was next to take the joker, ducking out of third position on Lap three.

The Swede returned to the main circuit at Chessen's Drift alongside his Peugeot-Hansen teammate Loeb, but was forced to tuck in behind the former WRC star.

Entering the North Bend Hairpin at the top of Hairy Hill on the same lap, Hansen had a half spin, caused by a left rear puncture on his Peugeot 208 and dropped out of contention.

By the fourth lap, Solberg had caught second place man Ekstrom, the reigning champion diving into the joker on the fifth lap, coming out just behind Loeb.

The Audi S1 driver tried to pass the Peugeot 208 through the Devil's Elbow and into the hairpin but couldn't find a way by.

Bakkerud released Volkswagen pair Solberg and Kristoffersson by taking his joker on the final lap and returned to the main circuit in a podium position, as like Hansen, Ekstrom also suffered a left-rear puncture on lap six on the highly abrasive Lydden Hill tarmac.

Solberg led Kristoffersson across the finish line in the first one-two for the PSRX team, which extended its margin in the team's championship to a staggering 69 points.

Bakkerud finished behind the Volkswagen duo in third place, securing Ford's first podium since the opening round in Spain.