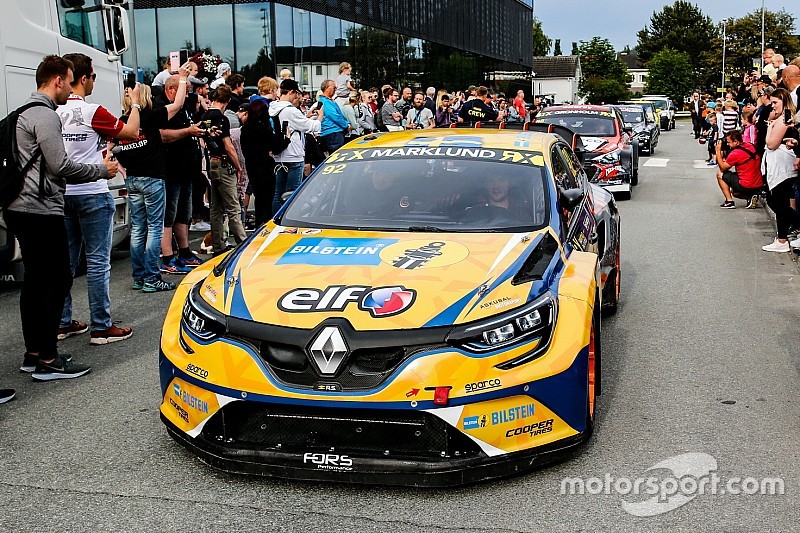 The heavens opened above the Lankebanen circuit minutes before the semi-finals, rendering event-long tyre strategies useless, with all 12 cars switched onto wets.

Having followed his day one performance with another fastest time on Sunday morning to top the Intermediate Classification on his return to the series, Niclas Gronholm started from pole position in semi-final one, the first drenched race in a weekend of baking sunshine.

He overcame the conditions in a tense encounter to secure pole for the final, where he was joined by a semi-final two winner, Liam Doran.

The race to the first corner in semi-final one had been won by Guerlain Chicherit from row three, but the GCK team owner was spun by contact in the low-grip braking zone. Doran repeated the launch in semi-final two and dived straight into the joker, won the race and lined up on the front row for the final.

In the main event, despite a rubbered-up first row making it extra-slippery, Doran made another good start and headed straight for the joker, but it was row two starter Kevin Abbring, making his World RX debut, who took the lead by taking a wide line in turn one.

Behind, pole sitter Gronholm dropped to third after a tussle with Kevin Hansen through turn one and two, as Doran led Marklund and Baumanis through the turn one joker.

Abbring led up front and started to gap Hansen and a fired-up Gronholm, the Finn trying everything he knew to get by the Swede’s Peugeot 208, while behind Marklund hassled Doran as he had throughout the semi-final.

For the first four laps, Doran and Marklund closed on the leading trio before Abbring ducked into the joker on lap five and plummeted down the order.

On the main lap inside the joker, Gronholm and Hansen made contact, the pair getting sideways and almost losing position, Doran backing out of the throttle into turn two, knowing the pair ahead still had to joker.

But, down the hill to turn three, as Doran’s Audi S1 suffered a technical issue, Marklund dived up the inside and into third, which became first when the leaders took their joker on the final tour.

Hansen and Gronholm returned to the main circuit second and third, Gronholm fending off Janis Baumanis to the finish as Marklund crossed the finish line to claim his maiden win.

Abbring ended his first event fifth and Doran made it to the end in sixth. Timmy Hansen continues to lead the points from brother Kevin.

Following the conclusion of the final, Hansen was given a 1 second penalty by stewards - decision No. 11 for ‘pushing #68 Niclas Gronholm and gaining an advantage’ at turn two.

The penalty swapped the positions, putting Gronholm second and Hansen third, a reverse of the scenario in the opening round at Yas Marina where Gronholm lost a maiden World RX win after being deemed to have pushed Hansen in the final.

Gronholm also received a reprimand in the Norwegian final for contact to the rear of Hansen’s Peugeot during the race.