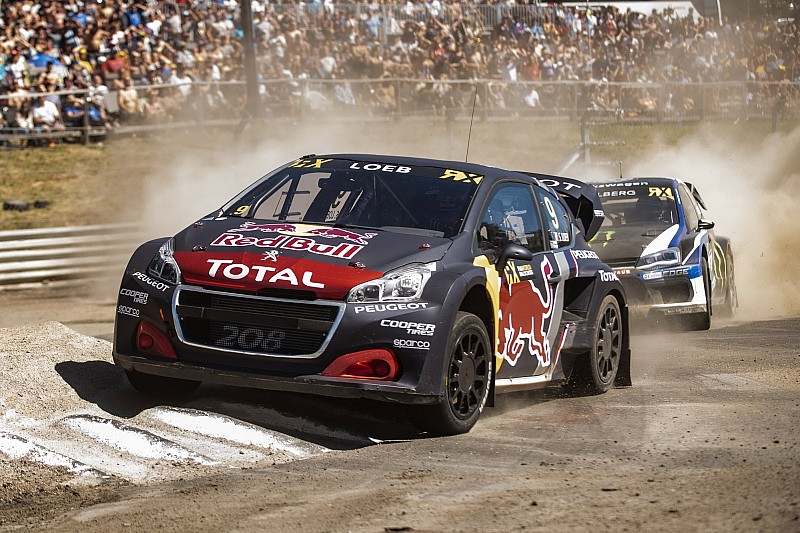 Peugeot World Rallycross driver Timmy Hansen believes the French marque's new 208 WRX has the pace to challenge Volkswagen’s dominant Polo Supercar in the second half of the season.

Halfway through the first year of running its rallycross programme in-house, Peugeot introduced a significant upgrade to its 208 WRX Supercar at the most recent round in Sweden, where Hansen appeared set for a podium finish until last-lap contact with Mattias Ekstrom.

The French squad took part in the in-season test at Riga in Latvia last week, where Sebastien Loeb and Hansen each drove for one-and-a-half days.

Peugeot’s new car features changes to the chassis, transmission, suspension and engine, the latter having been built in-house for the first time.

“We had a lot to do after Holjes, I think we were a bit surprised there how much work needed to be done, but we managed a good race there even though we knew a lot of things that we needed to improve,” Hansen told Motorsport.com.

“We’ve done some big steps here [in Riga], we’ve been super-busy and I think the car will be better when we go to Canada.”

Reigning drivers champion Johan Kristoffersson has won five of the six World RX rounds so far this season, the other victory being taken by Loeb in Belgium.

But Hansen feels the progress shown at the test, where Volkswagen and Audi also conducted running, can help him challenge VW drivers Kristoffersson and Petter Solberg in the remaining six rounds.

"I really believe that we have what it takes to challenge them, we just have to unlock all the potential that we have and that’s not easy,” he said.

“It takes a lot of work to get into the sweet spot of a car. We are working on it. The engineers are super good, they did a good job at this test to set up the plan, follow the plan and really find which ways we need to go. The car will keep getting stronger and stronger as the year goes on.”

Although the Latvian test was not timed, the general consensus amongst those conducting unofficial timing was that Peugeot was a close match for Volkswagen’s Polo on the Bikernieki circuit, with EKS Audi’s S1 a few tenths shy of the ultimate pace.

The next round takes place at the venue of Hansen’s most recent victory, at Trois-Rivieres in Canada next week, where the Swede won in 2016.

“Of course I want to repeat my latest win as early as possible, hopefully in Canada, but it’s a big challenge there with the straight line speeds” he said.

“Not only the launch, but also the aerodynamics, horsepower and everything it takes to be fast on the straights is very important there. I hope with our new engine that we’ll have a better race to the first corner than we have in previous years.

"I’m just going to go there to enjoy driving, have fun in the car and hopefully the chances play out in my favour and we can stand on the top step. But we’ll see, I’ll take the opportunities when they come.”