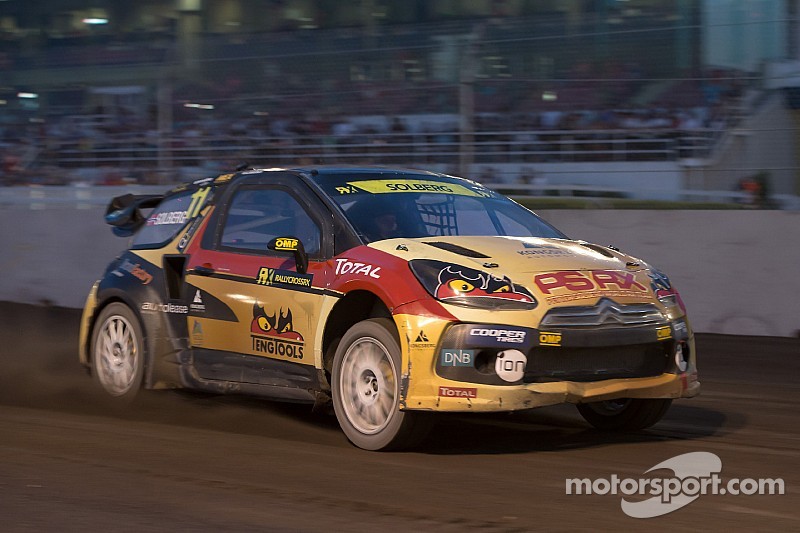 Based 20 miles south of Hamburg, Estering is the second oldest track used in World RX having hosted international events since 1973.

Norway’s Petter Solberg has established an early advantage at Red Kiwi World RX of Germany, round nine of the FIA World Rallycross Championship, after a second and third fastest heat time projected the Championship leader to the top of the Intermediate Points. Team Peugeot-Hansen continued its run of good form with Timur Timerzyanov second overnight, while Team EKS driver Mattias Ekstrom is third in an Audi S1 Quattro Supercar.

A record-breaking 41 Supercars started today’s German RX event, which also forms the penultimate round of this year’s highly-competitive European Rallycross Championship (Euro RX).  Based 20 miles south of Hamburg, Estering is the second oldest track used in World RX having hosted international events since 1973.

I love this circuit – it’s really technical but that first corner can be crazy.

Eight German drivers are competing on home soil this weekend including World Touring Car team owner and driver Rene Munnich who made his long-awaited debut in the Audi A3 Supercar but had a torrid day after retiring from both heats.

Ekstrom posted the quickest time during free practice but it was Euro RX points leader Robin Larsson who clocked the quickest time in heat one with a time of 2m36s. Petter Solberg was second fastest, while his older brother Henning took third in his Monster Energy backed Citroen DS3 Supercar.

“I love this circuit – it’s really technical but that first corner can be crazy.  You need to get it just right and there’s more pressure with so many cars.  The tiniest mistake can knock you out of a heat and with 40 other cars and with the Championship to think about, I need to get the right balance between flat out and getting through all of the races,” explained Petter Solberg who leads the overall driver standings by 28 points.

The joker is what makes this circuit really difficult,

Ford Olsbergs MSE driver Andreas Bakkerud also spoke of the difficulties on turn one, which saw the driver break his car’s suspension during the first heat.  The Norwegian explained: “There is a lot of traffic on the first corner, and I could feel the car start to dance. I managed to get round the corner but then I lost control again and the car was everywhere.

I could see Anton [Marklund] and Davy [Jeanney] behind and I started to panic but they were gentleman and slowed so they didn’t hit me.  It was really scary but I made it through and now I will push to make the semis tomorrow.”

Ekstrom went on to win heat two, pipping reigning European Champion Timerzyanov to the post by 0.3 seconds. “The joker is what makes this circuit really difficult,” explained Timerzyanov who is currently seventh in the driver standings. “I nearly rolled the car at one point, you need to be very careful.  My times have been good today and now I will get a good night's sleep and hope to be fighting for the win tomorrow.”

Fourth overnight is Euro RX front-runner Tommy Rustad after a sterling drive in his Volvo C30 Supercar. Henning Solberg rounds off the top five and spoke positively about his performance at the end of day press conference: “I’ve been really happy with the car today and have enjoyed the gravel sections of the circuit.  I think we have shown the kind of speed that we should have had in the previous couple of rounds and I’m looking for a place in the final tomorrow.”

After a day of close race action in the Super1600 and TouringCar FIA European Rallycross Championship categories, Ulrik Linnemann and Kjetil Larsen lead their classes respectively.

Tomorrow’s race action will commence at 0800 local time with open practice across all classes.  The semi-finals and finals will take place from 1400.