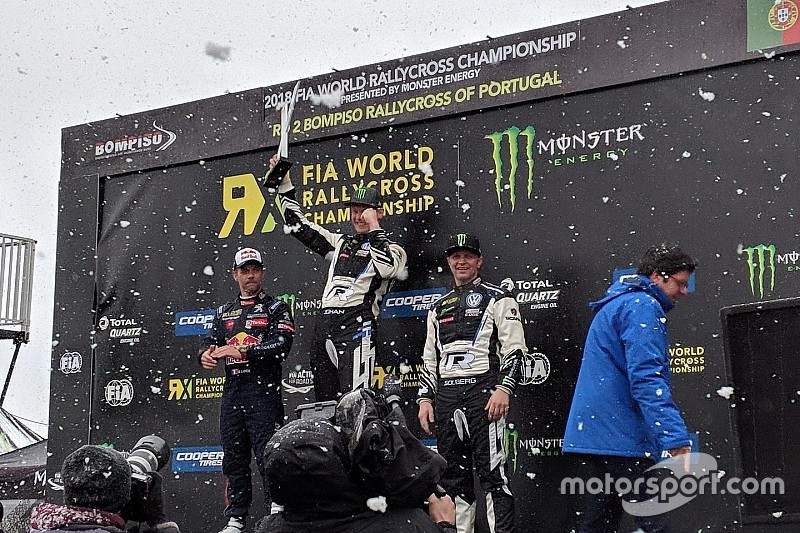 World Rallycross champion Johan Kristoffersson claimed victory in the second round of the series in Portugal, as snow covered the Montalegre circuit for the final stages of the event.

Having climbed from third on the grid in the first semi-final to take the lead at turn one and secure a front row slot for the final, Kristoffersson made the best start to take the lead from final pole-sitter Timmy Hansen in the run to the first corner.

Snow had threatened the circuit in the Vila Real mountains for the entire final day of the event, and it started blizzarding in the gap between the semi-finals and final.

Kristoffersson used his highly regarded slippery-surface prowess to extend a margin over second placed Timmy Hansen on the opening two laps, Hansen then crashing out of contention by losing control of his Peugeot 208 and hitting the barrier at the final chicane.

Hansen’s demise released Audi driver Andreas Bakkerud to take up the challenge to leader Kristoffersson, but he in turn had been caught by Hansen’s teammate Sebastien Loeb behind. The Frenchman had taken his joker at the first opportunity, coming out on top of a battle with third-row starter Petter Solberg.

By the end of the third lap, Loeb was right on the rear of Bakkerud’s Audi’s bumper and passed the Norwegian into the first corner of lap four.

Solberg, who had made it into the final despite stalling on the start of semi-final two, also closed the gap to Bakkerud but knowing his compatriot still had to take his joker, sat behind until Bakkerud took his joker on lap six.

Kristoffersson also took his extra route on the final tour, maintaining his lead ahead of Loeb, mirroring the top-two result from round one in Spain on another weekend where the PSRX Volkswagen team didn't have the ultimate pace over its Peugeot and Audi-backed rivals.

Solberg completed the podium, while Bakkerud finished fourth and GC Kompeition driver Guerlain Chicherit made his first ever final with the Prodrive-built Renault to finish fifth, having fended off pressure from Mattias Ekstrom for a final qualifying position in the closing stages of semi-final one.

Hansen recovered from his spin to finish the final sixth, over 20 seconds behind the leader.