Solberg and Kristoffersson jointly lead Italy RX after day one 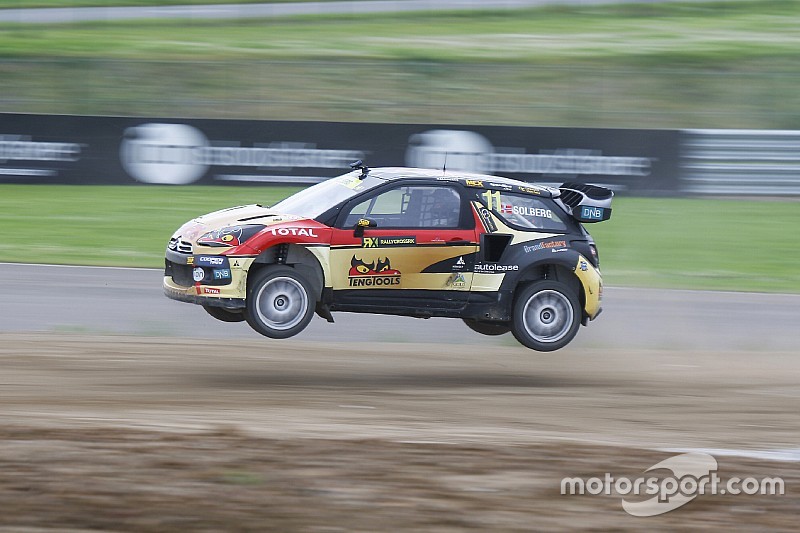 With two heats still remaining plus the semi-finals and the final, it is all to play for tomorrow in Franciacorta.

Petter Solberg [SDRX] and Johan Kristoffersson [Volkswagen Team Sweden] jointly lead the World RX of Italy, the penultimate round of the FIA World Rallycross Championship presented by Monster Energy, as both drivers took one heat win each on the first day. Ford Olsbergs MSE driver Timur Timerzyanov is third. Sweden’s Timmy Hansen – who is 19 points behind Solberg in the drivers’ standings – is currently fourth. With two heats still remaining plus the semi-finals and the final, it is all to play for tomorrow in Franciacorta.

In the FIA European Rallycross Championship, where Italy marks the fifth and final round, it’s Alexander Hvaal who leads the way in his Citroen DS3 despite suffering from gear selection issues in heat one. Jerome Grosset-Janin is second among the European drivers, the Frenchman took advantage of Tommy Rustad’s puncture in heat two to move ahead of the Norwegian after two heats. Rustad is currently fifth. Only six points separate Rustad and Grosset-Janin in Euro RX, with the European Champion to be declared tomorrow.

I struggled a lot – I expected a lot more tarmac on the circuit,

Solberg’s Championship bid suffered a setback at the previous round in Turkey but two days testing has worked wonders for the SDRX driver. “The tests we did prior to this weekend have worked very well. We made a lot of changes, in fact we pretty much changed the whole car!,” explained Solberg, who was suffering from a bad cold and high fever throughout today. “The day didn’t start so well - we broke the steering at the start of practice but everything was really good for the second heat and we went flat out. It’s very rough on the gravel section but I’ve looked at the data and taking about a second out of the others in the Joker Lap – this track seems to suit my driving style. Now I need an early night and hope to feel better tomorrow.”

Round one winner Kristoffersson took the heat one win and spoke of his desire to make the podium again this weekend. “We’ve done a lot of analysis on the car after Turkey where we changed a lot of small things,” explained the Swede. “We didn’t have time to test until today but it seems to have worked. I really like the track too, the layout is similar to last year and the tarmac sections suits me well. My goal is the podium - as long as we are always in the last race of each heat and beside the big guys, we have a change of making top three.”

Elsewhere, it was a disappointing day for Italy’s Gigi Galli who piloted the brand new Kia Rio Supercar on home soil. Galli – who is planning a full World Championship campaign in the Kia Rio for 2016 – showed good pace in free practice but retired from today’s heats due to an engine leak and low oil pressure. The former WRC driver explained: “Of course I’m disappointed but our main aim this weekend was to get the car finished in time and to get some time out on the track. We only have one engine at the moment and I didn’t want to risk coming back out with the car tomorrow and doing any more damage. I feel most sorry for my team, they have worked so hard over the last few weeks and always with a smile on their faces. I will come back stronger next time.”

Former F1 racer Gianni Morbidelli also had a tough day in the All-Inkl.com Muennich Motorsport Audi S3 Supercar. “I struggled a lot – I expected a lot more tarmac on the circuit,” admitted the rallycross debutant. “I don’t have a lot of experience and the top drivers are of a very high standard, it’s hard to compete. The car is good but it’s the first car I have driven in rallycross so I can’t compare it to anything. I must have more confidence tomorrow and hope to improve my times.”

Austria’s Manfred Stohl rolled his World RX Team Austria Ford Fiesta heavily in practice this morning, but a great effort by the team’s mechanics saw Stohl start heat one. “After the jump the steering broke and I couldn’t steer anymore. The car went to the right, hit the kerb and then it was like an aeroplane in the air. The damage was front and rear – everywhere, because it went end over end. There was just massive damage so I’d like to thank the whole team and all the mechanics what they have done in such a short time in incredible,” said Stohl.

The 2015 FIA European Rallycross Championship for Super1600 and the RX Lites Cup will be decided at the final round of the two categories at Franciacorta this weekend.

In RX Lites, Sweden’s Simon Olofsson had his best opening day of the season. Fastest in the first heat he was twice second quickest and is top at the end of day one, ahead of championship challenger Thomas Bryntesson. The Norwegian had a puncture in the first heat but was fastest in heats two and three to be second ahead of the fourth heat tomorrow morning. Championship leader Kevin Hansen is third overall ahead of 2014 champion Kevin Eriksson and Austin Cindric, the American making his first start in the RX Lites Cup.

In Super1600, debutant Dmitrii Bragin was fastest in his very first heat, followed by a fifth and tenth fastest times to be top after day one. Championship leader Janis Baumanis – who needs just four points to secure the title this weekend – is second, the Latvian fighting back from first corner contact in the first heat with title rival Krisztian Szabo. Italian Davide Medici is third.

Championship insight: What can happen in Italy?