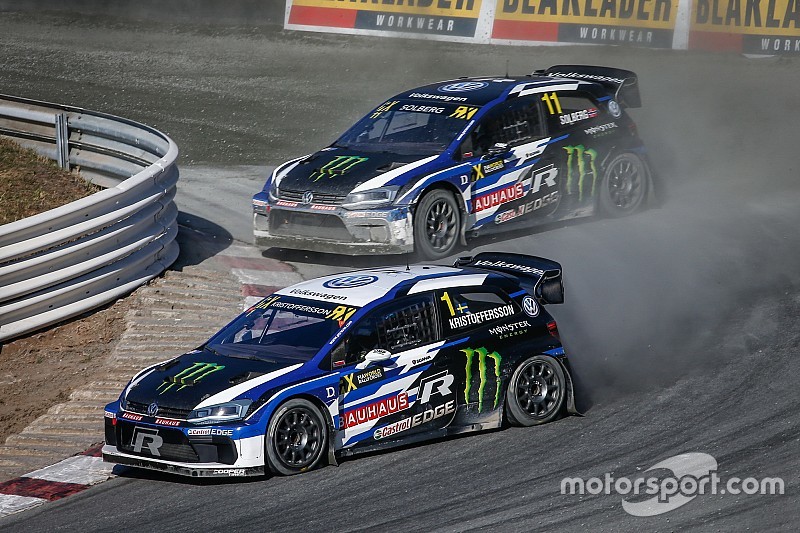 Petter Solberg’s PSRX Volkswagen Sweden team will not compete in the World Rallycross Championship next season.

Having competed in every round of World RX to date and won four drivers' titles with Solberg and Johan Kristoffersson, the Swedish squad will not take part in the championship in 2019 as initially planned.

The Torsby-based team has cited a lack of competition, following the departure of Peugeot’s works effort, Olsbergs MSE and Mattias Ekstrom’s Audi-backed EKS team in recent months, as the key reason for its sabbatical.

“It’s really sad, but the declining numbers of teams in the series makes it impossible for us to remain for 2019,” said team principal Pernilla Solberg.

Having returned to rallycross for 2013 following his WRC career, Solberg won the first ever World Rallycross Championship event in Portugal in 2014, and claimed the first pair of World RX drivers’ titles to add to his 2003 WRC crown.

His team secured Volkswagen backing for 2017 and was joined by Johan Kristoffersson in a pair of World Rally Car-derived, Volkswagen Motorsport-built Polo Supercars. While Kristoffersson won a brace of drivers’ titles, the PSRX squad twice won the teams’ championship.

“In the past two years the competition in WRX between the cars from Audi, Ford, Peugeot and Volkswagen has been huge, resulting in fantastic sport with close racing between some of the most famous drivers in motorsport,” said Volkswagen Motorsport Director, Sven Smeets.

“Unfortunately, with the exit of three works or works-supported teams from World RX, the situation has changed dramatically.

"Together with PSRX and Volkswagen Sweden, we had to re-evaluate the involvement in the championship.

"We certainly didn’t take the decision lightly, but we came to a mutual agreement not to continue in WRX in 2019 as there is huge uncertainty regarding the entries and the competition for next season.”

Smeets, one of the key advocates of World RX’s proposed switch to electric cars for 2021, says the German marque is still interested in being involved in the potential of ‘EWRX’.

“Naturally, Volkswagen Motorsport will keep a close eye on any developments towards the electrification of the sport of rallycross,” he said. “From the beginning we have been supporters of this initiative and we continue to be interested.”

The announcement also leaves the champion of the last two seasons, Johan Kristoffersson, without a drive for 2019.

Petter Solberg has stated that his squad is not permanently closing its doors, and that he will continue to compete with Volkswagen in 2019, but is yet to give any indication as to where he will drive. The Norwegian recently returned to the WRC to take part in Rally Spain driving VW’s new R5 Polo.

“We can all see the potential here, but it’s just not sensible to continue for PSRX Volkswagen Sweden in 2019,” he said. “The important thing to understand here is that this is a pause – a pause and not an end.

"As a team, we continue and we work together. We can’t say much about this now, but there will be more to talk about in the New Year.

“I still believe in World RX. I still believe this championship can deliver the most sustainable, relevant, entertaining and competitive racing anywhere in the world.

"We work on the future and we look forward to sharing those exciting plans with you early in 2019 – and those plans include me being behind the wheel of a Volkswagen.”