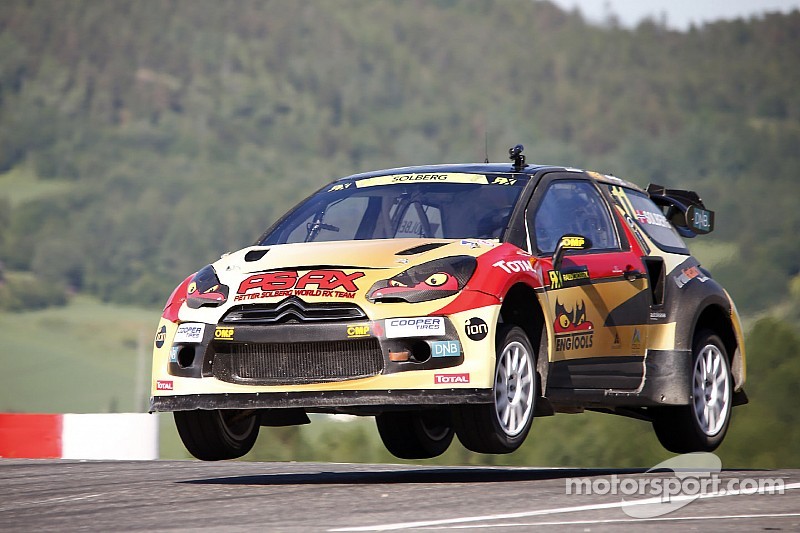 Petter Solberg pipped Sweden RX winner Mattias Ekstrom to the post by an unbelievable margin of just five thousandths of a second.

Norway’s Petter Solberg has won the Red Kiwi World RX of Germany, round nine of the FIA World Rallycross Championship presented by Monster Energy in what is the sport’s closest ever finish in its 47-year history. In a nail-biting final race, Solberg pipped Sweden RX winner Mattias Ekstrom to the post by an unbelievable margin of just five thousandths of a second. Robin Larsson completed the podium line-up finishing third in his Audi A1 Supercar.

Over 10,000 spectators travelled to Estering Circuit in north-west Germany today as mixed weather conditions and a record-breaking entry of 41 Supercars made for action-packed racing. Amongst the 76 cars entered to compete in SuperCar, TouringCar and Super1600, there were eight local drivers including the likes of six-time Guinness World Record Holder Ronny C Rock and World Touring Car regular Rene Munnich.

Wow, I don’t know what to say – I don’t think I have seen anything so close in my whole life,

“Wow, I don’t know what to say – I don’t think I have seen anything so close in my whole life,” grinned Germany RX winner Solberg who has now extended his World RX Championship lead to 52 points with just three rounds remaining. “The plan today was not necessarily to win but when I saw Robin’s [Larsson] mistake, I knew I had a chance. Then on the second last lap I made a mistake – I couldn’t remember if there was one more to go so I hesitated at the joker and lost some time. I heard on the radio that I needed to go flat out to the finish so I really pushed on the last lap. I didn’t even know if I had won when I crossed the line, it was a really incredible moment.”

Despite the closest win in RX history, two-time DTM Champion Ekstrom was satisfied with the runner-up spot. “If you are going to lose, then to lose by five thousandths of a second is not a bad way to do it,” joked Ekstrom whose team-mate Pontus Tidemand finished fourth after reaching his third final this season. “Of course I really wanted a victory for Audi here but we have two on the podium and three made it to the final with Pontus which is a great result for Audi on its home event. Congratulations to Petter on his win – you can’t buy a victory, you need to work hard and he certainly did that. I’m happy with P2.”

I didn’t get the best start, dropping a few places, but then took a hit on lap two which broke the steering,

One driver who looked likely to become World RX’s seventh different event winner this year was Robin Larsson, whose rapid start off the start awarded the 21-year-old Swede with the Monster Energy Super Charge Award. However, a mistake by Larsson on lap three gave Solberg the opportunity to move in front. Larsson took up the story: “If you have Petter Solberg behind you, it’s really scary I can tell you. I was nervous and I made a mistake and of course Petter jumped on this and went ahead but I’m really happy to be on the podium for the second time this year.”

Proving that points really do win prizes, Volkswagen Marklund Motorsport’s Topi Heikkinen was catapulted to second in the overall driver standings after finishing fifth in today’s final. The Finn steadily gathered points throughout the four heats before qualifying for the semis and reaching the all-important final. Heikkinen’s move up the standings knocked Ford Olsbergs MSE driver Reinis Nitiss back into third after the 18-year-old Latvian suffered a setback when his car’s turbo failed during heat three.

Despite failing to reach the semis, Nitiss was feeling upbeat: “I have to be happy with the pace even if I didn’t make it past the heats – there were a lot of gravel sections here and I was happy with the driving. There’s still three events left so the Championship title isn’t over but Petter is so fast and of course the gap is bigger than before we came here. We’re leading the Teams’ Championship and to win that title is our ultimate aim.”

Team Peugeot-Hansen was unable to continue the team’s string of podium successes this weekend despite an impressive run in all four heats. Both drivers were stuck in traffic at turn one of the semis but only Timmy Hansen progressed to the final. The 21-year-old Swede was running fourth for the majority of the race but after taking the joker on the final lap, Hansen dropped back to finish the event sixth overall.

The return of Ramona

Monster Energy World RX Team’s Henning Solberg was sitting third overnight in the Intermediate Classifications but a broken right steering arm during heat four knocked the Norwegian out of a chance in the semis. Elsewhere, successful rally driver Ramona Karlsson had a difficult time on her return to World RX. Despite demonstrating raw pace in the Albatec Racing prepared Peugeot 208 Supercar, Karlsson was eventually forced to retire after breaking her car’s steering during the final heat.

“I didn’t get the best start, dropping a few places, but then took a hit on lap two which broke the steering,” explained Karlsson who is also an FIA Women in Motorsport Commission member. “Coming into turn two I just couldn’t steer and went off into the gravel, out on the spot. It was a disappointing end to the day, as I desperately wanted to reach the semi finals this weekend, but that’s rallycross. I’ve thoroughly enjoyed driving the car and working with the entire team, it’s the most fun I’ve had for a long time.”

In the penultimate round of the Super1600 FIA European Rallycross Championship category, Latvia’s Janis Baumanis took his third category victory of the season despite an ongoing issue with his Renault Twingo’s gearbox. Lithuania’s Ernestas Staponkus and Denmark’s Ulrik Linnemann finished second and third respectively. Sergej Zagumennov finished fourth and remains at the top of the S1600 standings.

Norway’s Camilla Antonsen entered the record books today as she became the first female to win a round of the FIA European Rallycross TouringCar category. “This is only my second time on the track but the car was perfect and the guys in my team did a great job. It’s been a brilliant weekend!” Second place was awarded to Norway’s Torleif Lona and Anders Braten took the final podium spot. Daniel Lundh remains the TouringCar series leader, 14 points ahead of Lona with just one round remaining.

Martin Anayi, World RX Managing Director for IMG Motorsports, concluded: “Today we witnessed one of the closest finishes there’s ever been and the organisers have done a tremendous job at dealing with such a huge entry of cars. For two drivers to be separated by five thousandths of a second is really incredible and helps to demonstrate how extremely close racing RX creates. We also saw four manufacturers in the final today which goes to show just how diverse an entry that Germany RX delivered this weekend.

With Ford Olsbergs MSE leading a three-horse race in the Teams’ Championship, our next event in Italy is shaping up to be pivotal in the title chase. Today delivered one of the best TV shows that motorsport can offer and again goes to show the true potential of our fledging World Championship – well done to all the teams and drivers for putting on such a fantastic show.”

Round 10 of the FIA World Rallycross Championship will take place at the all-new RX track of Franciacorta in Brescia, Italy next week (27-28 September).

Driver points after Round 9, World RX of Germany 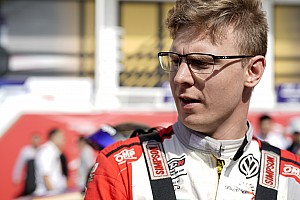