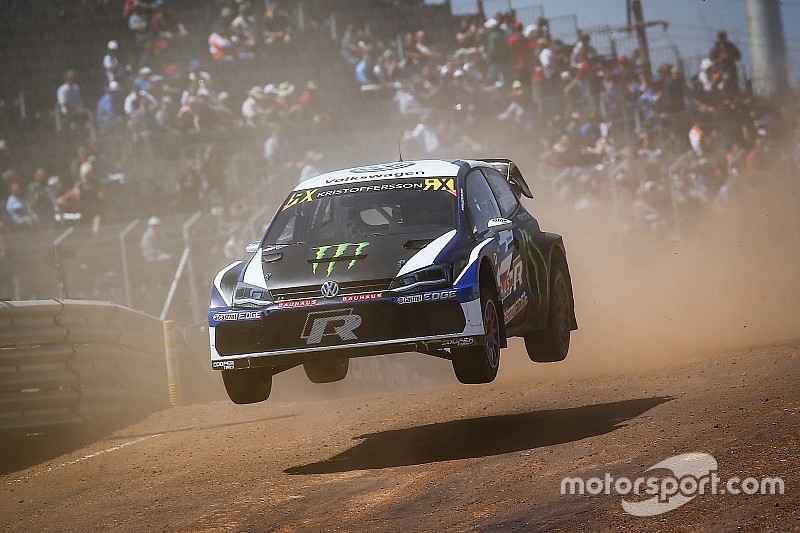 Two-time World Rallycross champion Johan Kristoffersson produced yet another performance worthy of his status by topping qualifying for the eighth time of the season in South Africa.

Kristoffersson’s weekend got off to a difficult start in Q1 when his Volkswagen Motorsport-built Polo Supercar endured a technical issue that left him languishing in 16th position.

But a trio of successive fastest times in the remaining sessions put him equal on qualifying points with overnight leader Sebastien Loeb, but ahead on count back.

Loeb initially secured the best time in Q3 by winning his encounter with a succession of fastest laps, but running in the final race Kristoffersson bettered Loeb’s benchmark to stop the clocks first.

He then survived turn one contact between PSRX teammate Petter Solberg and Peugeot pair Loeb and Timmy Hansen in Q4 to again keep his nose in front at the first corner and storm to another best time.

Loeb took a second lap joker in the final session in a bid to defend from Solberg behind and in the hope of leapfrogging Kristoffersson in front, but wound up second in the race and the times.

Hansen meanwhile set a brace of fastest lap times in the final session of the year and is third at the end of qualifying, one place up on Petter Solberg and followed by Audi pairing Bakkerud and Ekstrom.

A commanding race victory and third fastest time lifted Bakkerud ahead of his colleague in the overall order.

Kevin Hansen had a lap one battle with former DTM champion Timo Scheider on the opening lap of Q4 and ended up seventh.

Both GC Kompetition Renault Megane drivers Anton Marklund and Guerlain Chicherit also made the semi-final stages despite Marklund jumping the start in Q4 and Chicherit behind held up by slower traffic after his joker lap.

Manfred Stohl’s STARD team worked hard to repair Janis Baumamis’ Ford Fiesta after a broken propshaft in Q3 which the Latvian rewarded with another top ten time in Q4 to make the semis.

Scheider made the semis and so did triple European champion Timur Timerzyanov for Marcus Gronholm’s GRX team, but Gronholm’s son Niclas missed out for the first time in 2018.