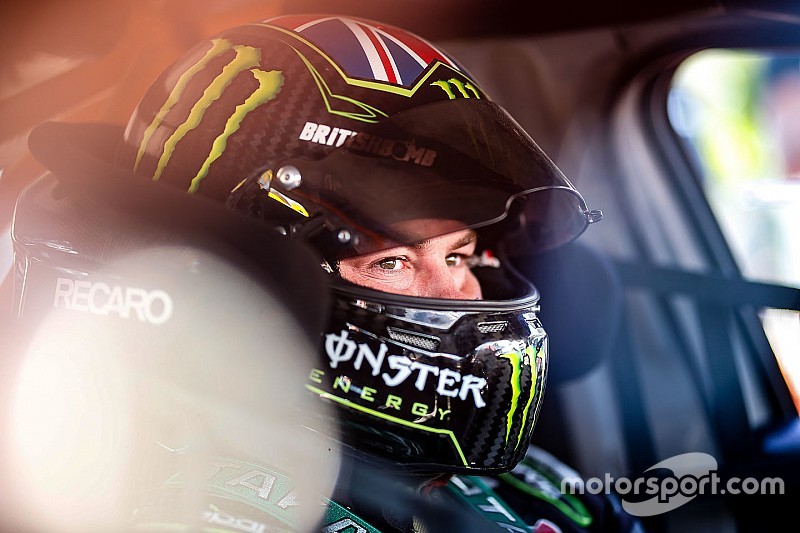 The Belgian Formula 1 host holds its first mixed-surface event this weekend for the third round of World RX with a layout that encompasses the famous Eau Rouge corner to accompany a long loose-surface banked final turn.

Seventh-fastest in the wet opening qualifier after an on-track battle with title-contender Timmy Hansen, Doran was one of only a few drivers to take dry tyres for the second runs, where he made the best start in his race and led throughout to set the best time.

His squadmate Bakkerud was fastest in Q1 to break the Hansen MJP team’s stronghold on the 2019 season so far, but could only manage ninth in Q2.

Such was the mixed-up nature of the order in changeable conditions that Bakkerud remains second at the end of the first day.

“The track looked amazing when I walked it on Friday morning, it’s brilliant, it really is,” Doran told Motorsport.com. “There’s no other word than it’s cool, then when the gravel started breaking up a bit and looked more like Germany [Estering] or Portugal [Montalegre], I was really excited to be honest.”

The wet conditions in free practice, which marked the first time the four-wheel-drive Supercars had run at the new circuit, caused rutting in the new loose surface sections, but track maintenance overcame a step in the transition between the unsealed surface and F1 asphalt before Eau Rouge ahead of Q1.

“They’ve done a brilliant job [here], this is the first new school rallycross track I’ve seen built at an F1 venue with the flair of the best of the old school rallycross tracks,” said Doran. “There was a little bit of nervousness around the paddock with how it broke up in practice, but with my experience of building tracks, you can’t get away from that.

"If you want the excitement we have here, you have to have a track you need to maintain, or otherwise you have a very sealed hard surface that you don’t touch. I wouldn’t change a thing, I think it’s brilliant.”

In his return to the sport after a two-and-a-half-year absence, and deputising in the teams’ championship points-scoring role for Marcus Gronholm’s squad in son Niclas’ absence, Joni Wiman won his race in Q2, also on dry tyres, to put his Hyundai i20 third in the Day 1 classification.

Championship leader Kevin Hansen battled in traffic through the first day and is down in 11th overnight, one place behind brother and teammate Timmy Hansen, but ahead of former World RX champion Mattias Ekstrom, making a return in his title-winning car from 2016.

“The laptime is very short,” said Ekstrom of the 35-second lap. “When I looked at the track map I thought the hairpin would be further up [towards Raidillon] and then come back down.

"I think the layout of the gravel section in the stadium section is really cool. It wasn’t so cool that we had the edges [in the surface] in free practice, but it’s a cool layout.”