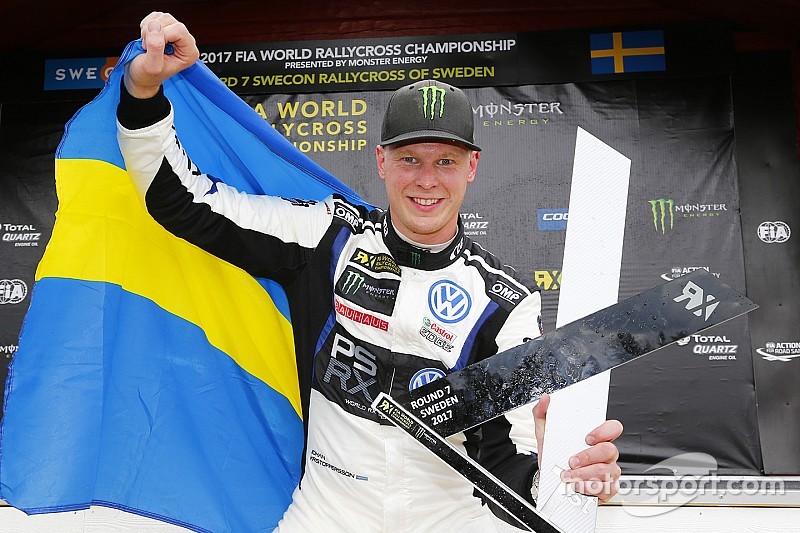 PSRX Volkswagen driver Johan Kristoffersson claimed victory and a maximum points haul from the Swedish round of the World Rallycross Championship at Holjes to further extend his series lead.

Kristoffersson won Sunday's first semi-final, leading from lights-to-flag, while teammate Petter Solberg stalled his Volkswagen Polo from pole position in the second and failed to qualify for the final.

Making the best start in the final, Kristoffersson fended off pressure through the opening corners from Andreas Bakkerud before gradually extending his lead throughout the race with a series of fastest laps.

When he took his joker on the final tour, he returned to the main circuit without pressure from behind and swept to a decisive win.

The Swede's third victory of the season, and his sixth-successive podium finish, extends his margin at the head of the order to 31 points over Solberg.

Bakkerud followed the championship leader throughout the final and remained second after taking his joker, in front of a pair of hard-charging Peugeots.

Team Peugeot-Hansen drivers Sebastien Loeb and Timmy Hansen, who had finished second and third behind Kristoffersson in semi-final one, both took their jokers on lap one of the final.

Hansen made a good start from the back row of the grid, but lost time behind Loeb at the joker entry and remained behind his team-mate.

STARD driver Janis Baumanis made his first final appearance of the season and ran fourth on lap one, on the tail of the similar Ford Fiesta of Kevin Eriksson.

Hansen's final lap wasn't without drama, though, as an issue in the closing stages meant he was forced to fend off Eriksson across the finish line.