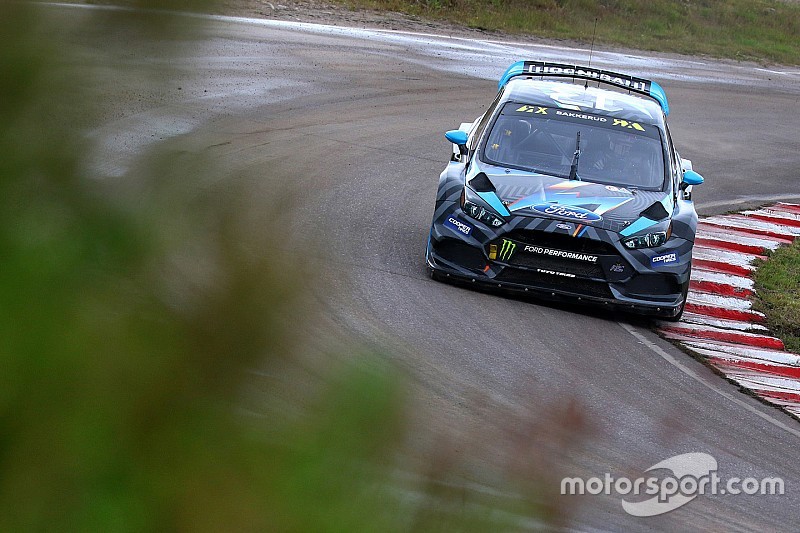 Norwegian Andreas Bakkerud secured his second World Rallycross Championship victory in succession by winning the Swedish round of the championship at Holjes.

Bakkerud won the second semi-final to earn pole position for the final and join Swede Timmy Hansen, who had won semi-final one, on the front row.

Nine-time World Rally Champion Sebastien Loeb started on row two, outside Johan Kristoffersson, who had finished top at the Intermediate Classification and second in the first semi-final to Hansen.

As the lights changed at the start of it final, it was Hansen who made the best launch to lead into the first corner, Bakkerud diving straight into the turn two joker lap at the the first opportunity ahead of Kristoffersson, while Loeb followed his Peugeot-Hansen team mate on the main circuit.

Hansen made a small mistake on landing from the jump in the last sector of the Holjes lap at the end of lap one, causing Loeb to take avoiding action and Volkswagen RX Swede driver Anton Marklund to moved up to second.

Running fourth on lap one, Mattias Ekstrom took his joker lap on the second tour, dropping behind Bakkerud who then amazingly caught the leading trio by the end of the second lap, despite having taken the joker.

Loeb pushed hard on the rear of Marklund’s Polo before the Swede took his joker, returning to the main circuit behind team mate Kristoffersson but ahead of Ekstrom, the DTM star then retiring later in the lap with mechanical problems.

Peugeot duo Hansen and Loeb took their jokers on lap six, Bakkerud jumping the pair to move into the lead.

Hansen could sniff hone victory and had a look at the inside of Bakkerud’s Ford Focus RS RX but lost corner exit in the velodrome section of the track and the race was Bakkerud’s.

Hansen looked to have secured second but suffered a technical problem with the handbrake on his Peugeot 208 WRX just meters from the finish line, Loeb moving to second while Hansen managed to creep over the finish.

Kristoffersson was also hampered by problems in the closing stages of the race, Marklund climbing to fourth at the finish.

To complete a difficult weekend of the Norwegian, Petter Solberg failed to make it into the final.

The double World RX champion pushed Kristoffersson hard for the lead in semi-final one but when the joker laps played out, the Citroen DS3 was fourth and missed out on a top three position to make it though.

The gap at the head of the championship remains at five points, with Ekstrom leading from Solberg. Bakkerud’s Swedish points haul moves him into third in the table.