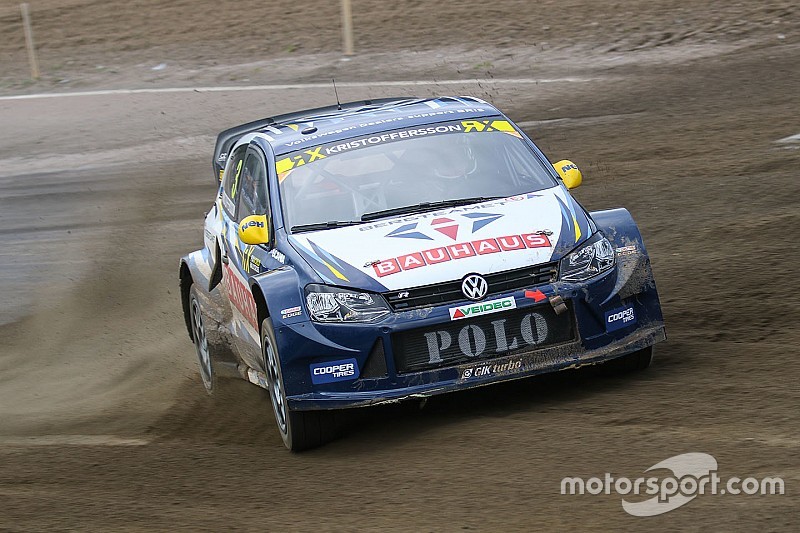 Swede Johan Kristoffersson set the fastest time in Q2 at his home round of the World Rallycross Championship to top the Intermediate Classification at the end of day one.

The Holjes circuit had started to dry out before the second session began for the World RX drivers, but heavy rain fell during the first race before quickly stopping again, the track starting to dry.

Kristoffersson, who had been second fastest in Q1, ran side-by-side with OlsbergsMSE driver Kevin Eriksson in the first corner of the last race in Q2 and led throughout, taking his joker on lap three and returning to the main circuit at the front to set the fastest time and be top overnight.

“In the first three events of the year we had some headwind but really had the pace, but in the last two races we were in a position to make good results but didn’t quite have the same pace as the others,” said Kristoffersson.

“Now we have the chance to make a good result and I am so happy that we are there at the front. It feels like we are back where we belong so I’m super, super happy.”

Sebastien Loeb, who had set the fastest time in Q1, started on pole position in the same race as Kristoffersson but spun at the joker lap exit due to hitting the barrier dividing the extra-route with the main circuit, replicating the same mistake made earlier in the session by compatriot and team mate, Davy Jeanney.

“It was just a mistake, which is annoying. I think I need to do some good races tomorrow like the first one today and not the second one to get into a good rhythm,” said Loeb, for whom the Holjes circuit is the first of the season that isn’t totally new to the Frenchman, thanks a pre-season test.

“The conditions are so different to the test. It was raining in the two last runs then but it was not muddy, so it was quite different.

"But ok, it was important to test here because it’s really a really special track here and no easy to drive. There’s a lot of blind corners so it helped.”

Loeb remains third at the end of day one with Finnish driver Toomas Heikkinen second overall, Mattias Ekstrom’s team mate winning the third race of the session while Timur Timerzyaov, Richard Goransson and Anton Marklund squabbled for position behind.

Arguably the most entertaining race of Q2 was the first on track, where Mattias Ekstrom, Petter Solberg and Andreas Bakkerud all started having failed to finish their Q1 races.

It was Reinis Nitiss who led into the first corner in the heaviest of the rain, while Solberg and Ekstrom immediately took their joker laps.

Bakkerud chased former OlsbergsMSE team mate Nitiss hard on the opening lap before taking his joker on lap two, returning to the main circuit ahead of Ekstrom but behind Solberg.

Bakkerud wasted no time in making a move passed Solberg with a perfectly executed cut-back manoeuvre into the velodrome section of the circuit and won the race when Nitiss jokered on lap four.

Bakkerud’s time was good enough for second in Q2, he lies seventh overall. Janis Baumanis is fourth at the end of day one with Niclas Gronholm having his best World RX event to date in fifth, the Finn passed team mate Kevin Eriksson in their Q2 race, the Swede slowed by a puncture.

Due to their non-finishes in Q1, Solberg and Ekstrom are 15th and 17th overnight.