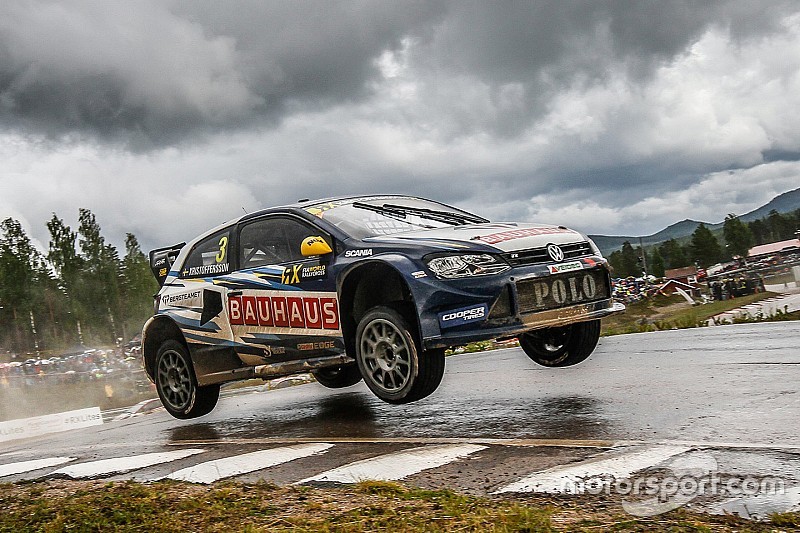 Volkswagen driver Johan Kristoffersson continued his form from the opening day at the Swedish round of the World Rallycross Championship to qualify top at the Intermediate Classification on Sunday.

Norwegians Petter Solberg and Andreas Bakkerud each set a fastest time in Q3 and Q4 to climb the order.

Fighting back from crashing out of the first qualifying race of the event on Saturday, Solberg made the best start in the last race of Q3 and led the race from start to finish, beating the previous best time of the session by over two seconds, which had been set by Sebastien Loeb.

Bakkerud was second on track to Solberg in Q3 and then made the best start in the last race of Q4 to lead throughout the race, while behind Mattias Ekstrom, Solberg and Kritsoffersson took straight for the joker lap.

The trio were held up on the third lap by Loeb, who suffered from a mud-covered windscreen and seemingly a problem with the Peugeot 208s right front suspension.

Ekstrom, like Solberg and Bakkerud also making up for troubles on day one, finished second to Bakkerud and set second fastest time, lifting the championship leader to fifth overall ahead of the semi-finals.

While a pair of third fastest times for Kristoffersson secured him top spot and 16 championship points, Bakkerud wound up second and will start on pole position in semi-final two. Solberg and Loeb also claimed front row spots for the knock-out races.

Swede Timmy Hansen led Peugeot stable mate Davy Jeanney in their Q4 race and was fifth fastest to be ninth at the Intermediate stage, one place ahead of Finnish driver Niclas Gronholm.

Much to the delight of the home crowd, Swedish privateer Robin Larsson will also progress to the semi-finals in sixth overall with a pair of sixth fastest times on day two, Larsson pushing compatriot Hansen hard on the final lap of their Q4 race.

Kristoffersson’s Volkswagen RX Sweden team mate Anton Marklund qualified for the semi-finals at he other end of the order to that of Kristoffersson, he is 12th.

American star Ken Block has again missed out on the semi-finals in 13th overall, as has Russian Timur Timerzyanov, who broke the steering on his World RX Team Austria Ford Fiesta on landing from the the big Holjes jump in Q3 while leading his race.