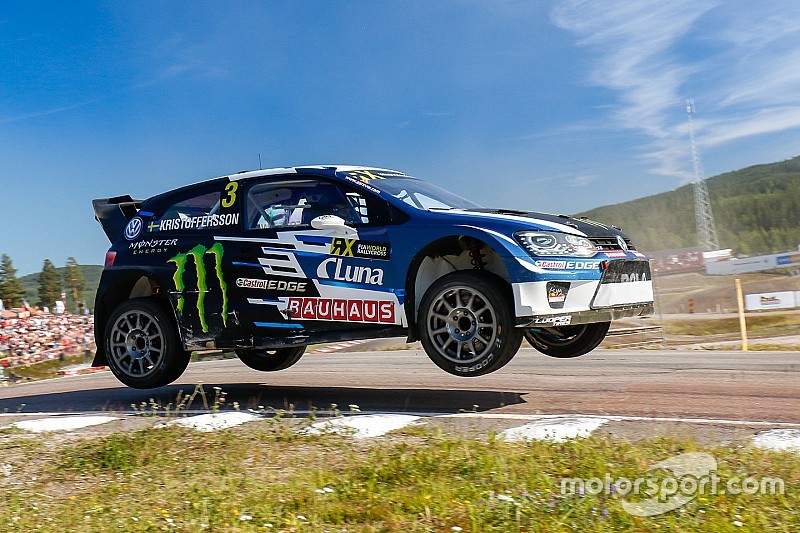 Kristoffersson was fastest of all in Q3, pipping double-champion Solberg to the best time, before Solberg struck back in Q4.

With the pair starting first and second on the grid, Solberg remained on the standard lap at Turn 2 as Kristoffersson took his joker.

Solberg maintained his lead after he took his joker on the final tour and set the fastest qualifying time of the weekend, which moved him from fourth to second in the intermediate classification behind Kristoffersson.

Norwegian Solberg's elevation was in part thanks to an error from Andreas Bakkerud.

Bakkerud had been third-fastest in Q3 but jumped the Q4 start and had to take two joker laps as a penalty.

Despite the extra joker, which costs drivers an additional three seconds in Holjes, Bakkerud was still eighth in Q4 and sits fourth overall, behind the Volkswagen pair and Sebastien Loeb - who used four new tyres in Q4 to win his race.

Loeb's Peugeot-Hansen team-mate Timmy Hansen set a brace of fourth-fastest times in Q3 and Q4 on Sunday morning to be fifth in the intermediate classification, ahead of impressive performances from Kevin Eriksson and Niclas Gronholm.

Having raced at the Holjes circuit in a Supercar twice previously, Gronholm, son of double-World Rally Champion Marcus, was never outside the top seven in his privately-run, M-Sport-built Ford Fiesta and comfortably qualified for the semi-finals.

Eriksson meanwhile was part of a gaggle of Austrian-run Ford Fiestas to make it into the top 12, the Swede joined by double DTM champion and MJP Racing Team Austria team-mate Timo Scheider, who chased Gronholm hard in their Q4 race after both drivers took a first lap joker.

Triple European Rallycross Champion Timur Timerzyanov also qualified, despite struggling with broken steering in morning warm-up and then making contact with Reinis Nitiss in Q3 at the joker lap exit.

Timerzyanov pushed hard in Q4 to pip Sebastien Eriksson to race victory and make the top 12.

As Timerzyanov climbed into the semi-final positions, Nitiss retired from Q4 with a problem and Toomas Heikkinen had a spin, meaning that in team owner Mattias Ekstrom's absence, none of the EKS cars made the semi-finals.

Ekstrom's replacement, PG Andersson, did not make the cut after setting a best time of 11th in Q4.