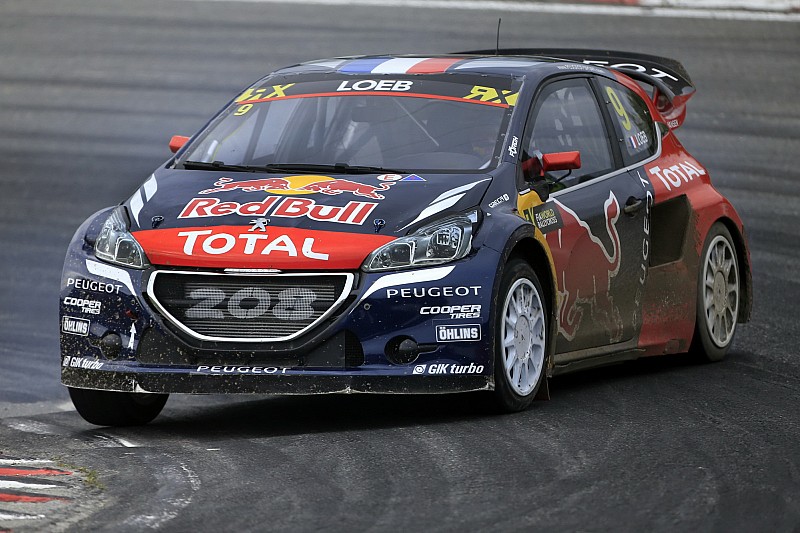 World Rallycross Championship protagonists Mattias Ekstrom and Petter Solberg both failed to finish qualifying one at the Swedish round of the championship, while nine-time World Rally Champion Sebatsien Loeb set the fastest time in a drama-filled session on a drying track.

Ekstrom led the start of the first race before immediately taking his joker lap. Quickly catching the leaders of the race, Kevin Eriksson and teammate Toomas Heikkinen, Ekstrom looked like he would win on track until his Audi S1 rolled to a halt in the Velodrome section of the Holjes circuit.

“The e-gas (electronic throttle) went down so when I hit the gas there was nobody home,” said Ekstrom.

“It’s a shame because even though the track was drying I think we would have been in the top three with our pace, but that’s motorsport.”

Finnish driver Niclas Gronholm, son of double world rally champion Marcus, won the second race on track having taken an early joker when the main pack of cars were held up behind Munnich Motorsport’s Renis Nitiss on the lap one, the Latvian’s Seat Ibiza suffering from broken rear suspension.

Loeb won the race to the first corner of the third race in Q1 and was never headed, despite pressure from Johan Kristoffersson behind, to set the fastest time.

Loeb’s Peugeot-Hansen stable-mate Davy Jeanney led the fourth race to the first corner ahead of Solberg, who attempted to head into the joker lap section on the second tour, but clipped the rear of Jeanney’s Peugeot, sending the Norwegian’s Citroen DS3 into the Armco barrier on the outside.

In the same race, Andreas Bakkerud ran into troubles on lap two, allowing Timmy Hansen, who had been fastest in the morning’s wet free practice session, through on the inside of the final corner.

Hansen then hit his own problems on lap three, spinning after the circuit’s famous jump, while Bakkerud span twice on the final lap with two right-side punctures on his Ford Focus RS RX, and collapsed front suspension. He didn’t finish.

“That was good, no mistakes,” said Loeb. “I took it a little bit safe because I didn’t want to make a mistake, it’s so tricky here in these conditions.”