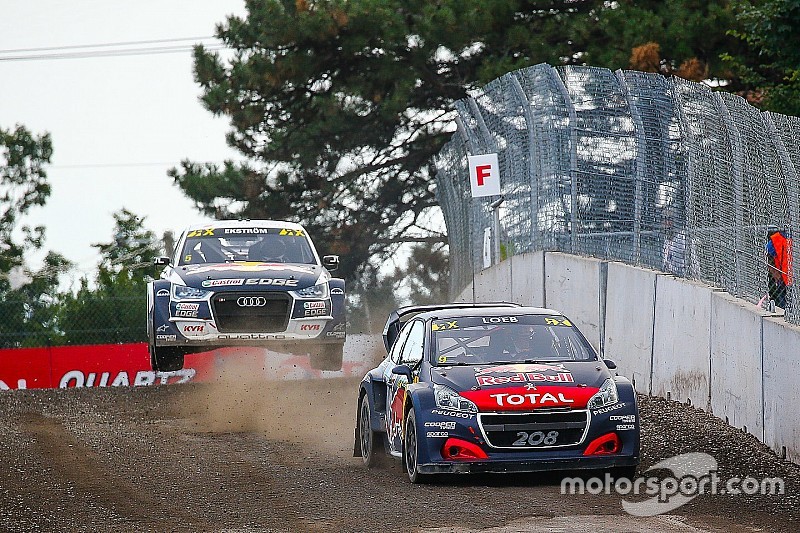 Rally legend Sebastien Loeb dominated the opening day of the Canadian World Rallycross round at Trois-Rivieres by winning both Q1 and Q2 in Peugeot’s new 208 Supercar.

The French marque debuted the heavily revised 208 WRX a month ago in the Swedish round in Holjes, before entering an intensive testing period in the mid-season break, giving the outfit confidence that it could challenge Volkswagen’s championship-leading Polo R Supercar.

That work paid dividends on the first day at Trois-Rivieres, as Loeb led both of his races throughout to set a pair of fastest times and head the standings from Audi driver Mattias Ekstrom, who had been fastest in free practice one and was then second in the day’s two qualifiers.

The Swede won his race in Q1, the first of the day, before chasing Loeb throughout the final race in Q2, using a last lap joker to overcome Petter Solberg despite the Norwegian’s exuberant efforts to pass his fellow former World RX champion on the inside of the extra-route joker.

Solberg was twice third overall and holds the same position at the end of day one, but his championship-leading team-mate Johan Kristoffersson unusually only just features inside the top ten.

Kristoffersson ran second on the opening lap of his Q1 race, behind team mate Solberg having started on the outside of the grid, but lost ground when he was passed by Ekstrom’s team mate Andreas Bakkerud and was forced into a wall at turn seven. He was also hit in the rear by GRX driver Timur Timerzyanov and wound up 10th quickest at the end of the race.

Kristoffersson then took an early joker in his Q2 race but Bakkerud, who had taken the lead at turn one, covered him off by taking his joker on lap two, Kristoffersson also getting beaten to the flag by Timmy Hansen. Kristoffersson is ninth overnight, one place behind OlsbergsMSE driver Kevin Eriksson in a strong showing for the 2014 World RX teams’ champions, running a revised engine in its Ford Fiesta this weekend.

Two of the series’ youngest drivers are fifth and sixth, Kevin Hansen ahead of Niclas Gronholm, the Finn again best of the drivers racing for a team without manufacturer support. He drove the GRX Hyundai i20 to fourth best time in Q1.

In the third round of the Americas Rallycross series, also running at Trois-Rivieres, former Formula 1 driver Scott Speed twice set the fastest time in a Volkswagen Beetle but his Volkswagen Andretti Rallycross team mate Tanner Foust crashed out heavily in Q2 while trying to overtake Ken Block, who is second at the end of day one.