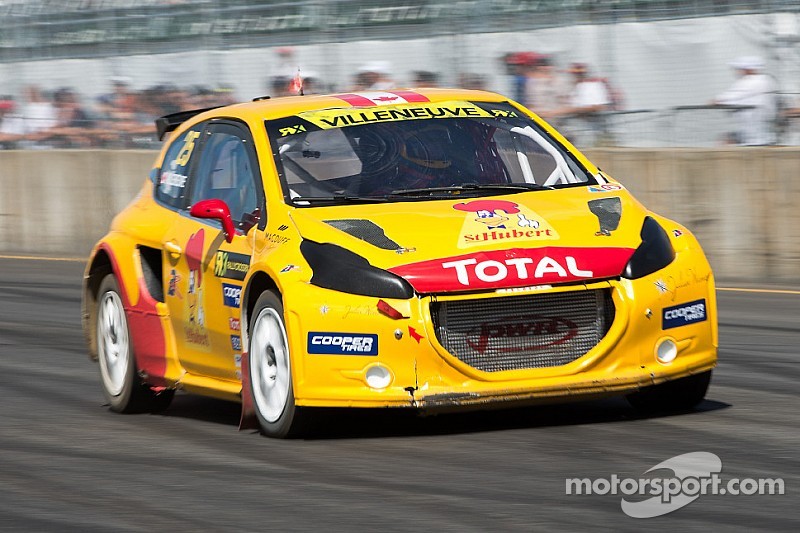 Petter Solberg has established a 51-point lead and could lift the Championship trophy in Italy...

The winner of the inaugural FIA World Rallycross Championship presented by Monster Energy could be decided at this weekend’s World RX of Italy (27-28 September).  Following three consecutive victories, Petter Solberg has established a 51-point lead and could lift the Championship trophy in Italy if his advantage at the end of the weekend stretches to 60 points or more.  Italy RX will form the final round of this year’s FIA European Rallycross Championship (Euro RX), which Robin Larsson currently leads by 10 points.

Round 10 of this year’s World RX will be staged at Franciacorta International Circuit in Brescia, north-west Italy, and will be the third all-new RX venue that the Championship has visited so far this season.  At 1,390 metres in length, Franciacorta is one of the longest circuits of the year and is comprised of 40% gravel and 60% asphalt.

Now myself and Andreas [Bakkerud] remain fully concentrated on winning the teams’ title for Ford.

A total of 80 drivers will take part including 40 Supercar entries, 19 Super1600s, 11 TouringCars and 12 entries in the supporting RX Lites Cup. Among those competing at Franciacorta is a diverse range of motorsport stars including former F1 World Champion Jacques Villeneuve, Italian WRC star Gigi Galli and WTCC team owner, Rene Munnich.

Despite a star-studded line-up, all eyes will be on Norway’s Petter Solberg as the PSRX driver continues his quest to become the first double FIA World Champion.  The former WRC Champion explained his strategy:  “The big thing for me now is points. If I see the chance to go for the win in Italy, I will be there straight away as I love to win but all of our eyes are on the title so I can’t take any risks.  Now the pressure is really on.”

Solberg continued: “We went to the Franciacorta for the launch of World RX at the start of the season, so we have some idea of what to expect. We didn’t drive the full circuit, though, so I can’t give you a complete guide to what it’s like – but I do know that it’s one of the longer tracks we will compete on this year. There’s a very long, fast straight and a big jump. It’s quite a change in character from the other circuits and it looks like we will run the car in similar specification to Lohéac in France. Of course, there is gravel at the Franciacorta circuit, but it’s really hard and packed gravel, which is a bit more like asphalt.”

I’m really looking forward to getting back behind the wheel in Franciacorta.

Fifty-one points behind Solberg and still in the title chase is Volkswagen Marklund’s Topi Heikkinen who has demonstrated that World RX is as much about scoring points as winning races. “We’ve got three rounds left and I’m going to be doing my best to win them all,” said the confident 23-year-old Finn. “It’s a slightly tough period for us at the moment, but bad luck comes and goes. I’m still feeling very optimistic if you look at our speed.  Now we’re only 10 points behind Ford Olsbergs MSE in the teams’ standings so if myself and Anton [Marklund] get a good run in the heats, I’m confident we can close that gap even further.”

Five further drivers – Reinis Nitiss, Andreas Bakkerud, Timur Timerzyanov, Anton Marklund and Timmy Hansen - can still mathematically challenge Solberg for the drivers’ title. Nitiss is most likely out of the five names listed above but admitted that with a 54-point deficit the chances were slim. “Anything can still happen but Solberg is close to running away with it,” explained 18-year old Nitiss matter-of-factly. “Now myself and Andreas [Bakkerud] remain fully concentrated on winning the teams’ title for Ford.”

Following a two-race absence due to commentating commitments, former F1 World Champion Jacques Villeneuve will rejoin Albatec Racing alongside team owner and driver Andy Scott this weekend in a Peugeot 208 Supercar. The French-Canadian commented: “I’m really looking forward to getting back behind the wheel in Franciacorta.   I believe the track will suit my driving style well and naturally I’ve been watching Andy and the team’s progress with interest over the last two races, they’ve done well to reach the semi finals against such strong competition and I’ll be going flat out to ensure there are two Albatec Peugeot 208s up at the front in Italy.”

Rallying sensation Gigi Galli has entered his home RX event as a wildcard entry with Ford Olsbergs MSE.  The Italian, who amassed thousands of fans thanks to his spectacular driving style, helped design the Franciacorta circuit and will be a firm favourite in front of a passionate home crowd.  "It won't be easy as there are a lot of other drivers and the car's power is so much more than I am used to,” explained Galli who hails from Lavigno in north Italy. “I had a test recently in Sweden and I've also been involved heavily in the building of the RX track, hopefully this can help me when it comes to the weekend.”

Joining Galli in a fourth Olsbergs MSE prepared car will be Swedish Touring Car Champion Richard Goransson who has previously competed in RX Lites but will make the step up to Supercar for both the Italian and Turkish RX rounds.  Goransson explained: "My programme in RX Lites this season has been done as a preparation for these two rounds in Supercars. I've been getting a thorough education in RX thanks to Olsbergs MSE. This season has been about being as prepared as possible and ready to take this step."

Monster Energy World RX Team, Team Peugeot-Hansen and Team EKS will also compete in Italy but will start on the back foot as none of the teams’ drivers were present at the Franciacorta media launch back in April.

As Italy forms the fifth and final round of this year’s Euro RX, Robin Larsson will be eager to follow his fine performance from Germany last weekend in order to seal this year’s European title.  Still capable of winning Euro RX, however, is Petter’s older brother Henning Solberg who is currently 10 points behind Larsson.

Interestingly the Solberg brother duo could potentially win both the Euro and World RX drivers’ titles this weekend. Reigning Junior WRC Champion Pontus Tidemand is third in Euro RX standings with a total of 38 points, just one point ahead of Peter Hedstrom.  Rounding off the top five in the European points table is reigning French Rallycross Champion Jerome Grosset-Janin.

Monster Energy Super Charge Award: Awarded to the first driver in the Supercar final to enter the first corner off the start line.