Championship leader Sebastien Loeb (Citroen) dominated the leg as the Frenchman closed in on a record-breaking fifth consecutive victory. He was fastest on all eight stages to extend his advantage to 1min 24.6sec. Marcus GrÃ¶nholm (Peugeot) was ...

Championship leader Sebastien Loeb (Citroen) dominated the leg as the Frenchman closed in on a record-breaking fifth consecutive victory. He was fastest on all eight stages to extend his advantage to 1min 24.6sec. Marcus Grönholm (Peugeot) was his closest challenger throughout the morning but he broke a driveshaft early on the second stage of the afternoon loop and dropped more than two minutes in the remaining three tests to slide to fourth. Carlos Sainz (Citroen) punctured four tyres on the opening loop but lost no time and punctured two more when he left the road briefly on the final stage. Sixth-placed Harri Rovanperä (Mitsubishi) struggled for grip during the afternoon while team-mate Gigi Galli dropped 40 seconds this morning after losing turbo boost. Jani Paasonen (Skoda) retired after crashing on the second stage while Petter Solberg (Subaru) climbed back to ninth after yesterday's problems.

A grand slam run today, which harvested eight fastest stage times from a possible eight, has seen Sébastien Loeb, Daniel Elena and their Xsara WRC extend their lead in the 2005 Acropolis Rally, while Carlos Sainz and Marc Marti still figure in 3rd position, more than a minute clear of their closest chaser. With a further 100km of competitive action to come tomorrow, Citroën enjoys an appreciable advantage at the sharp end of tonight's provisional leaderboard.

Sébastien Loeb/Daniel Elena: "I pushed hard in the first two stages of the morning's loop, and even harder in the last two which were cleaner. I felt really comfortable during the morning running on the narrower Michelins. When I feel as good as I do today at the wheel of my Xsara, I can do what I want with it. And that's a terrific feeling!"

Carlos Sainz/Marc Marti: "My main objective is still to score points for Citroën. If I can do that and finish on the podium too, it will be a bonus."

Petter Solberg endured another tough time on today's second Leg of the Acropolis Rally of Greece. Starting this morning from 14th place overall, after problems on yesterday's first Leg, his opportunities to fight back were badly affected by a poor starting position. Despite running as the second car through the sandy and slippery stages, Solberg made up five places during the day and holds ninth place overnight. Re-starting the rally today under the Superally system, Stéphane Sarrazin enjoyed a trouble-free Leg in his Impreza WRC2005. On only the second gravel rally of his career, the Frenchman grew in confidence throughout the day and traded stage times with other far more experienced WRC drivers.

Petter Solberg/Phil Mills: "It's been a very difficult day. Running so close to the head of the field meant we had the worst possible road surface, and we simply couldn't go any faster. There was a lot of fine, sandy gravel out there and it was very, very slippery. I did my best, and the car has been perfectly reliable, but it was never going to be enough to make up for the road position. It's frustrating to be so uncompetitive on stages that I won last year - but I suppose not entirely unexpected in the circumstances. We made a few adjustments to the car set-up at the mid-point service, but somehow the package didn't come together properly. For tomorrow we'll keep fighting, keep doing our best, and aim to take away as many points as possible."

Stephane Sarrazin/Denis Giraudet: "I'm finding this rally is a lot harder than Sardinia, but I'm enjoying the challenge. I felt a lot more confident on the second pass through the stages this afternoon, we took a different tyre and of course had the benefit of experience at that point, but it felt much better. There are still plenty of areas in which I can improve - my pace notes for instance are still too cautious - but I'm happy with the progress. It's good to be exchanging times with some of the more experienced gravel drivers. The car has run perfectly, we've had no problems at all, and I'm looking forward to the final four new stages tomorrow."

BP-Ford World Rally Team drivers Toni Gardemeister and Jakke Honkanen lie second in the Acropolis Rally of Greece tonight after another thrilling day's action over tough gravel mountain roads. The flying Finns fought tooth and nail with Carlos Sainz throughout the second leg of this eighth round of the FIA World Rally Championship and a series of lightning quick times on the afternoon speed tests powered their Ford Focus RS World Rally Car ahead of the Spaniard. Fellow countrymen Mikko Hirvonen and Jarmo Lehtinen maintained their overnight fifth position in a privately-entered Focus RS after eight more demanding gravel special stages, covering 122.72km, south of the rally base in Lamia. Norway's Henning Solberg and Cato Menkerud held seventh in another privately-entered Focus RS but crashed out this afternoon.

Toni Gardemeister/Jakke Honkanen: "We've had a good battle with Carlos," said Gardemeister. "We wanted to get ahead of him and I knew that if I pushed a little harder I could do that. I drove over a lot of stones but it seems that this rally is suiting me and, especially, the Focus. It seems that you have to take some risks to go fast here. It has been different to yesterday and quite rough in places. I'm happier with today but the stages were nicer to drive yesterday."

Peugeot At the start of the second stage of this afternoon's loop, Marcus Gronholm came onto the Peugeot Total team radio to announce that he thought he had broken a driveshaft. He was left to complete the unlucky stage 13, as well as two further stages totalling 28 kilometres, before he could have the problem fixed at service. The problem was eventually traced to an inexpensive yet essential jubilee clip in the transmission, but the damage had already been done. Marcus lost nearly two minutes and his comfortable second place. The Finn is now fourth, with a 2m44s gap to the leader.

Marcus Gronhölm/Timo Rautiainen: "On the road section after the short SS12, I felt the car pull to one side and at first I thought it was a problem with a wheel or a tyre. But then off the line on the next stage the transmission was slipping, so I knew the problem was much more serious. The only thing I could do was lock the diffs and try to carry on, but the car was extremely difficult to drive. We did everything we could but of course we lost a lot of time so the chances to win are gone. Now we just have to concentrate on scoring the most points possible."

Markko Martin/Michael Park: "Today was fine - we had no real problems. We made a generally good tyre choice for all the stages and the car was entirely reliable. There are maybe some little things that we can change at service but basically we are concentrating on getting to the finish. There is not much else to report."

After the second day of the Acropolis Rally Skoda Motorsport World Rally Team driver Armin Schwarz remains one place outside the manufacturers' points positions. Armin climbed 24 places today and was among the top eight times on SS14 but is carrying a 25 minute penalty for the sections he missed during the opening day. Without that he would be lying eighth overall this evening. Jani Paasonen's hopes of improving on his overnight 12th place were dashed on this morning's second stage when he slid wide and rolled 20 metres over a sheer drop. Both Jani and co-driver Jani Vainikka were unhurt but there was damage to the roll cage of the Fabia WRC 05 and that means it will not be possible for him to continue in the rally tomorrow.

Armin Schwarz/Klaus Wicha: "With the SupeRally penalty the only thing today was to drive for the finish and to try some new things on the car. We can still get into the points if we are lucky so we have to keep going."

Jani Paasonen/Jani Vainikka: "I was trying so hard not to make a mistake and so this was really bad luck. It was about 12kms into the stage on a fast left into a tightening right. The car slid a little bit wide and the left wheels went over the edge of the road. Normally there is something extra there but this time there was just nothing. The car rolled about three times and it was so slow that I had a lot of time to think about what was happening. It stopped about 20 metres down with no chance to get back."

The Mitsubishi Motors Motor Sports WRC crew of Harri Rovanperä and Risto Pietiläinen lead the team's assault in the Acropolis Rally, and Lancer WRC05 team-mates "Gigi" Galli and Guido D'Amore have powered up the leaderboard, overhauling Markko Märtin in the process. The crews hold sixth and seventh respectively with just four stages remaining in this, the eighth round of the FIA World Rally Championship.

Harri Rovanpera/Risto Pietilainen: "Mid- way through SS13 the gear-shift alarm came on and then another three or four kilometers later I missed second gear and switched to the manual system. It was tricky though and we lost time because the stage was so twisty. Then we had a puncture in the same stage, although it was impossible to tell which one. There was a vibration and we changed the front right for the next stage, but it was the same situation. We ended up changing all four tires, but then had another puncture on the front right before the start of the last stage! The tires were also too hard this afternoon, even though the roads were cleaner."

Gigi Galli/Guido D'Amore: "Today has been good, other than the one small problem with the engine this morning. We started the day carefully and are sticking to our original tactics; this is good. Despite the engine problem, our position stayed the same and then we were able to pass Markko. For sure it is easier for me in the second lap each day, as I am learning the roads more, but the goal remains to learn for the future. Tomorrow three of the four stages are new so this will make it more even between everyone and it will be interesting to compare our performance in these conditions." 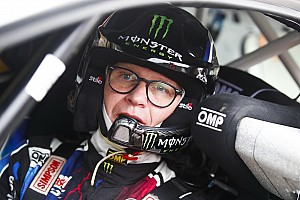