Thierry Neuville appears set for a second WRC victory of the season with three stages of Rally Argentina remaining, leading a Hyundai 1-2 by 45 seconds from Andreas Mikkelsen. 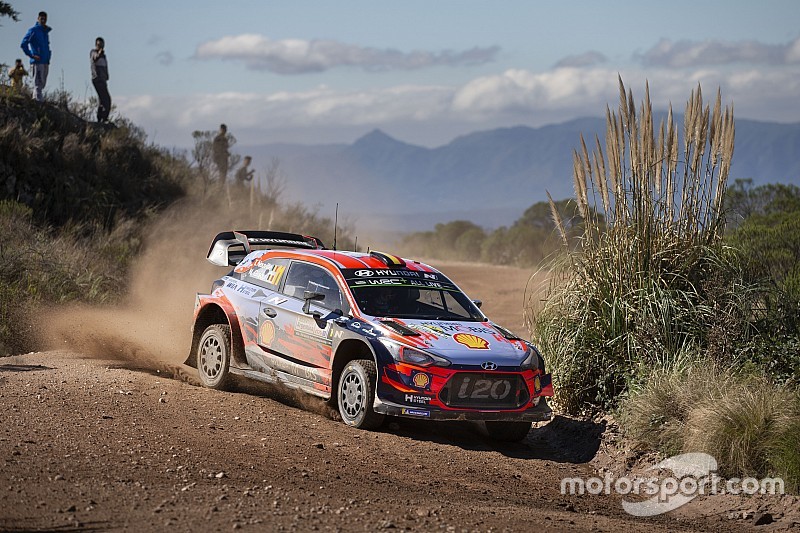 Current points leader Neuville had been locked in a close fight with Toyota’s Ott Tanak until the Estonian was forced to pull off during SS14, giving him a comfortable lead over Mikkelsen.

Tanak disappeared from the lead fight when he parked his Toyota Yaris midway through the Mataderos-Cuchilla Nevada stage on the inside of a slow left-hander. A technical issue is likely to blame for his retirement, with no outwardly visible signs of damage to his car.

Mikkelsen strengthened Hyundai’s position at the front by winning the final stage of the day, despite his i20 WRC leaking fluid on SS14 which had been spotted by third-placed Kris Meeke.

At one point on Friday, Toyota had all three of its Yaris WRCs in the top five but Meeke is now the only driver from the Japanese marque in a front-running position.

His podium is under threat from a recovering Sebastien Ogier, who was afflicted by power steering failure after clipping a gate post on Saturday morning.

There was controversy due to Ogier unexpectedly reaching an open fork in the road in which he hesitated and then took the long route, which contributed to his impact with the gate post.

Organisers taped up the shorter, right hand fork in the road for the afternoon pass, with Ogier suggesting the “positions are going to change [tonight]” given some drivers had taken the shorter route in the morning.

Ogier is only 2.8s behind Meeke after SS15 thanks to winning two of the afternoon’s three stages and 6s ahead of Hyundai's Dani Sordo, who very nearly went off after going too fast over a jump before a left-hander on SS15.

Jari-Matti Latvala (Toyota) finished the penultimate leg of the rally in sixth, complaining of a minor engine misfire at the end of SS15 but still within striking distance of Sordo, 3.8s in arrears.

Seventh-placed Teemu Suninen struggled through SS14 with a broken intercom, with notes from co-driver Marko Salminen cutting out intermittently.

Should Ott Tanak return under Rally2 regulations on Sunday, he would incur only 14 minutes of penalties, which would slot him into ninth place ahead of WRC2 driver Pedro Heller.